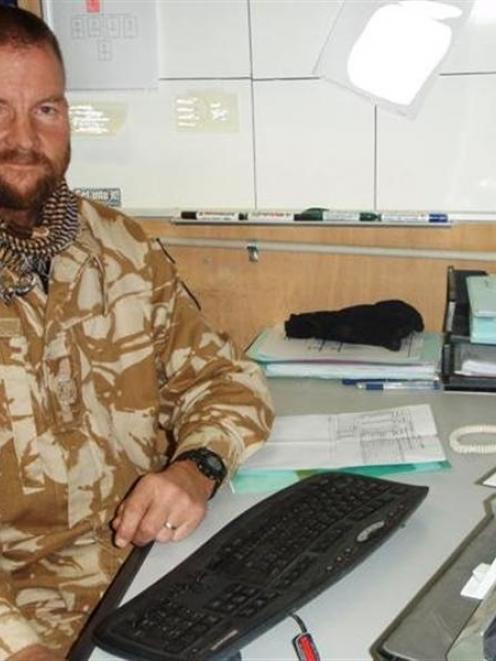 Chief Petty Officer Powell (48), who grew up in Mosgiel and later Berwick, south of Dunedin, is part of the New Zealand Defence Force contingent stationed in Bamiyan, Afghanistan.

A member of the New Zealand Navy, he has been serving alongside New Zealand, United States and other coalition forces since August as an assistant personnel officer working in administration at the Kiwi base.

Speaking to the Otago Daily Times from Afghanistan yesterday, he said Christmas Day in the conflict zone was a mixture of celebrations and regular duties.

It was his first Christmas away from his family since marrying wife Joanne (45) about 20 years ago, despite postings to East Timor and other locations during his time with the navy, he said.

And it was certainly different from his summer holidays at home in the South, with snow on the Afghan mountains surrounding the base and three dumps of the white stuff in the past month.

Temperatures had plunged as low as -20degC, and one of CPO Powell's most treasured presents sent from home was a hand-warming stick that was activated when snapped.

"I would say it's more a white Christmas. We are looking out at all the mountains and there's snow on them. We have got little bits of snow around the hilltops and a little bit around the base as well."

The entire contingent was to celebrate Christmas Day with a large lunch in the base's mess, which had been decked out with a Christmas tree, stockings and decorations, he said.

The troops had also received gift packs from the Royal New Zealand Returned and Services Association, as well as presents from loved ones in New Zealand, he said.

CPO Powell's own goodies from home included Minties, Watties tomato sauce, reduced cream and onion soup and other "Kiwi-type food that we wouldn't get over here normally", he said.

He had also spoken to his wife and children Ben (17) and Nicholas (14) once already, by the time he spoke to the ODT yesterday, having called them at 1.30am Afghan time as his family sat down for a large Christmas breakfast.

However, all the comfort food and long-distance telephone calls could not completely conceal the emotions during the holiday period.

"You do miss your family and that type of thing, but as long as you can contact them - I think it would be worse if you couldn't contact them.

"My wife makes a lovely breakfast. That's something I do miss, and probably seeing the extended family [for Christmas]."

CPO Powell's deployment would stretch to April next year, without a break.

Asked if he was looking forward to coming home, he said: "Oh, heaps. Heaps."