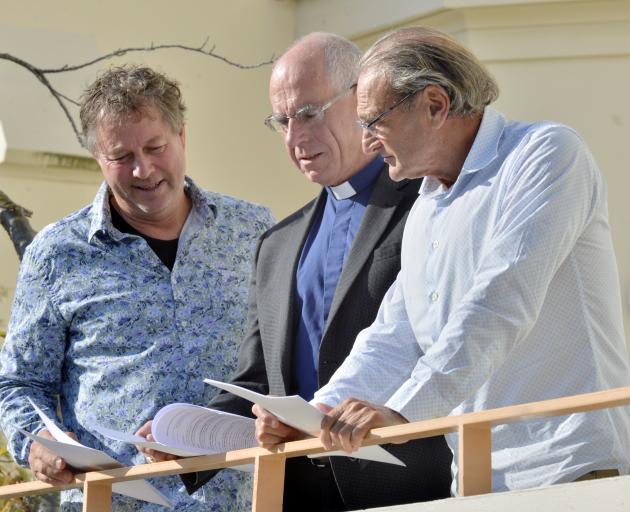 Catholic Bishop of Dunedin the Most Rev Michael Dooley, yesterday signed a memorandum of understanding with representatives from the Male Survivors Aotearoa support group.

There to sign it with him, in the Catholic Pastoral Centre, at St Joseph's Cathedral in Dunedin, was MSA chairman Philip Chapman and Otago branch senior manager Dugal Armour.

Mr Armour said the agreement meant survivors of faith-based abuse would be referred by the church to a new MSA group launched in Dunedin to cater for them.

The group could then work with survivors to help them access whatever services they needed, such as counselling, either one-on-one or as part of the group, he said.

Already, about 40 survivors in Dunedin were being assisted by MSA, but from a variety of settings, including state care.

The new Dunedin faith-based support group had only recently been launched, but already had nine members here, he said.

Mr Chapman said the agreement was initiated by his group and was believed to be the first of its kind in the country.

It was hoped the agreement could become a template for other dioceses across the country.

Mr Chapman said male survivors could take many years to finally reveal their abuse, although that was changing as media coverage and the pending royal commission encouraged men to come "out of the dark".

But even then, they risked becoming "lost in the system that's not really functioning", he said.

The new agreement would "keep survivors together and ensure they are getting the support they need", he said.

He praised Bishop Dooley for taking the steps necessary to address the impact of faith-based sexual abuse on survivors.

Bishop Dooley said the "goodwill" between him and the Male Survivors Aotearoa group was "really important" and would help deliver better outcomes for survivors.

He hoped other dioceses would follow in Dunedin's footsteps, regardless of how they did so.