City of Literature’s Maori name can have racy meaning 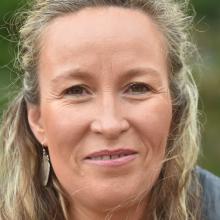 Paulette Tamati-Elliffe
Dunedin City of Literature has been recast as a "spring of orgasmic energy" with its new Maori translation.

Paulette Tamati-Elliffe told the story behind the translation at the Creative Cities Southern Hui yesterday morning.

Otepoti — He Puna Auaha is the Maori name she has developed for the City of Literature after a request to do so by the Dunedin City Council.

Ms Tamati-Elliffe said a direct transliteration using words such as pukupuka (book) "did not cut it".

Instead the word "puna", meaning a spring or source of creativity had been chosen, and "auaha" meaning to shape, form, fashion or innovate were a better fit.

However auaha could also mean to throb or thrill with passion, so could be used for the word orgasm, also a creative force.