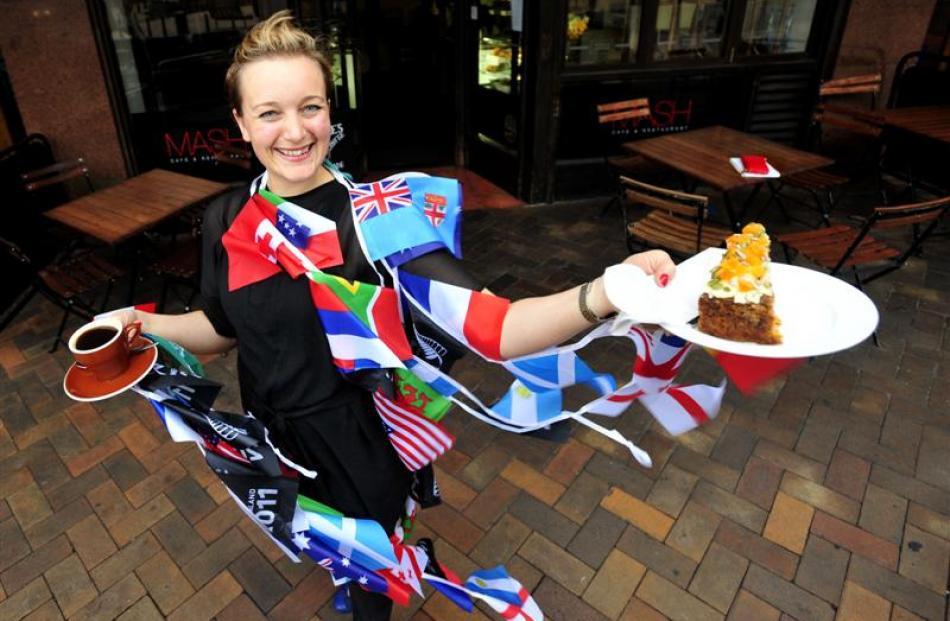 Mash Cafe owner Erin van Duyl is prepared for an influx of customers for Rugby World Cup 2011 in Dunedin. Photo by Craig Baxter.

The greater city, meanwhile, is as ready it can be to roll out the welcome mat when members of the Argentine rugby team arrive at Dunedin International Airport tomorrow night, deputy mayor Chris Staynes says.

The Argentinians will become the first players to arrive in Dunedin for the cup - and the only ones to receive a Dunedin airport welcome - when they step off their domestic flight from Christchurch at 8.05pm.

The team will be one of six visiting Dunedin during the tournament, which kicks off in Auckland next Friday night.

Mash Cafe owner Erin van Duyl said she was prepared for the tournament, with staff and service ready to be "harder, better, faster, stronger".

"I think most people in the Octagon have stream-lined menus to make sure things crank out of the kitchen," she said.

It would also be important for tables to be turned over quickly to ensure visitors, and the city's residents, were not disappointed when looking for somewhere to eat.

Product had been stockpiled and security hired, and a special licence for extended opening hours had also been acquired for match weekends.

Ms van Duyl had already noticed an increase in tourist numbers in town and believed the impact of the cup would be "unprecedented".

'The Craic head chef Kirsty Owens said the bar had been stockpiling for the past month.

With 15,000 English fans alone expected to follow their team to the city, he anticipated good flow-ons for local businesses.

The Scottish Shop owner Erin Hogan said preparations had been under way for a while, with Sunday trading due to start a month earlier than usual.

She had already noticed more Scottish people travelling through town on their way to Invercargill, the base for the Scottish team.

"This is the biggest event the city has had in a long time. You can plan all you like, but there will be any number of things that can go wrong on the day."

Rugby World Cup regional co-ordinator team services Kim Newman said the Argentine team would be greeted by kapa haka performers and Dunedin Mayor Dave Cull, before making its way - "hopefully through the crowds that have come to welcome them" - to the team bus.

Ceremonies would continue when the Argentine team received a civic welcome, and tournament caps from International Rugby Board chairman Bernard Lapasset, at a ceremony in the Dunedin Town Hall at midday on Sunday.

The public were invited to watch the ceremony, including a Maori welcome, Highland dancing and Chinese lion dancing, but should be seated by 11.50am, she said.

The ceremony would be repeated for the England team on Tuesday, September 6, at 5.30pm. Caps would be presented by IRB vice-chairman and former England rugby player Bill Beaumont.

Ms Newman was also finalising details of school visits and open training sessions while the teams were in Dunedin.

Council Rugby World Cup co-ordinator Debra Simes said between 50 and 70 community events would take place in Dunedin during the tournament.

The council had received 16 applications in recent days from mainly inner-city bar owners, as well as "one or two" Dunedin rugby clubs, wanting longer opening hours or to extend their premises on to the street, council liquor licensing and projects officer Kevin Mechen said.

All would be considered and a decision made by the end of the week, he said.

Plans to convert the town hall into an accredited fan zone were also well advanced, with big screens, food and beverage services - together with a purpose-built bar - to cater for up to 2000 fans, Dunedin Venues Management Ltd chief executive David Davies said.

The fanzone's operation would be funded by DVML and staffed by stadium caterer Compass Group New Zealand, with security on hand to ensure a well-behaved crowd, and was expected to make a small profit, Mr Davies said.

Cr Staynes said the biggest challenge would come on the second day of the tournament, with up to 30,000 fans expected to watch the match between England and Argentina in Dunedin.

RWC matches in the South