A collection at the Otago Museum showcasing the fragility of the earth’s oceans is the biggest  yet in an annual collaboration between artists and scientists, organisers say.

The exhibition, organised by the museum, the Otago Polytechnic and the University of Otago,  features work created by 20 scientists and 30 Dunedin artists. Otago Polytechnic staff member Pam McKinlay was co-curator  with university lecturer Dr Jenny Rock.

The theme "Art + Oceans" was so popular she had to introduce a cap on the number of artists involved for the first time in its six-year history, she said. One of the 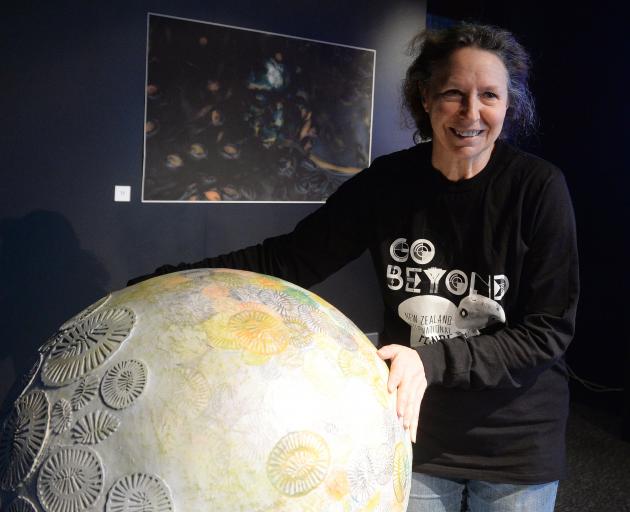 ‘‘Art + Oceans’’ exhibition co-curator Pam McKinlay at the Otago Museum with a sculpture of a coccolithophore. Photo: Linda Robertson

centrepieces was made up of two sculptures of coccolithophores, taken from the exhibition and community event "Oku Moana (My Oceans)", which ran earlier in Dunedin in the New Zealand International Science Festival. The single-cell organisms help remove carbon dioxide from the atmosphere. One artwork was of a complete, undamaged coccolithophore, and the other was of a dented one. The aim was to "raise how important they are, in people’s consciousness", she said.

Other features included photography and treasure chests of paua jewellery. The exhibition  would run until August 5, and  then be travel  to a Sustainable Seas conference in September.