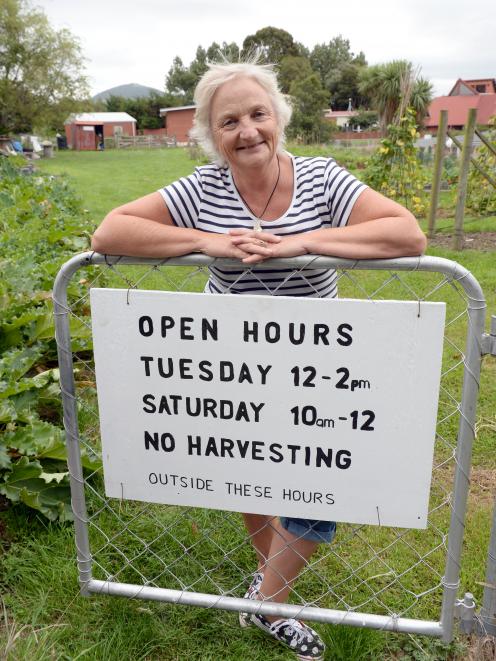 Green Island community garden co-ordinator Marion Thomas with a new sign to discourage theft from the garden. Photo: Linda Robertson
They took the lettuces, then damaged the potatoes, but it was when the Green Island Community Garden’s carrots got cleaned out that Marion Thomas snapped.

"Prior to Christmas someone was taking lettuces, one every three days or so, which was annoying but not the end of the world. Hopefully, they were going somewhere where they were needed," she said.

Then, spuds with a ‘leave me’ sign on them were pulled up. Shortly after, Mrs Thomas returned to the garden after working there the previous morning to find "someone pretty much cleaned out our entire crop of carrots."

"If people had taken enough for a meal each time they worked in the garden, which is pretty much how we work it, that crop would have lasted for ages."

In the wake of six months worth of veges being taken in one fell swoop, new signs have gone up at the Shand St facility reminding people the garden is a community initiative and to take only what is needed.

"Possibly, it was just a case of people not actually realising what the concept of the garden is," garden committee member Mrs Thomas said.

The garden now has new signs with contact numbers, opening hours, and advice not to harvest out of hours.

To the best of Mrs Thomas’ knowledge, no vegetables have been stolen since.

The garden is planted and tended by volunteers, who offer their time working the soil in return for some of the produce.

Its purpose was to be a meeting place for fellow gardeners, and a place where people could learn to grow their own produce, Mrs Thomas said.