Concept plan to go to consultation 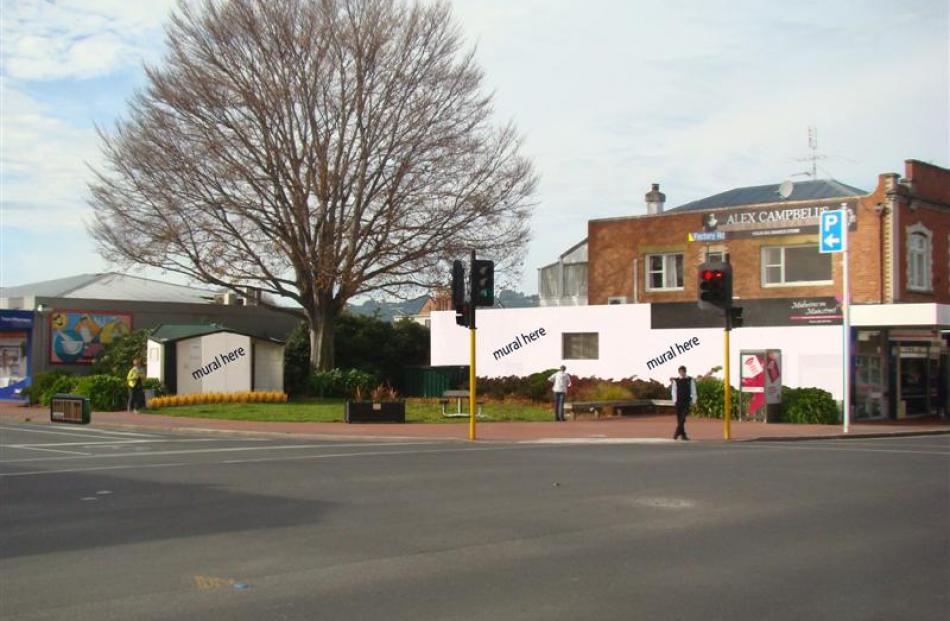 A concept plan for a makeover with murals on the corner of Gordon and Factory Rds in Mosgiel. Photo supplied.

A messy Mosgiel corner with a history of ''conflict'' is set for a makeover.

Dunedin City Council urban designer Peter Christos said he had created concept plans to ''simplify the space'' on the corner of Gordon and Factory Rds.

He was asked to create the plans after a picnic table was installed and ''conflicted'' with the sculpture of leaf-shaped concrete paving stones.

Some stones were removed to install the table.

Mr Christos presented several plans to the Mosgiel Taieri Community Board last week, including ''plan four'', for murals to be painted on a wall of a neighbouring business and the toilet block, a blade sign and a recycling bin moved to the kerb, existing flower boxes repositioned and more landscaping carried out.

The picnic table would remain on site and the concrete pad would be painted green.

The murals would link Mosgiel to the street art in Dunedin, he said.

''It's an opportunity to make a connection, so we are one city of Dunedin,'' Mr Christos told the board.

Mr Christos said he believed if the building owner agreed to the mural, he would be responsible for maintaining it and he could apply for a council grant to help pay for the maintenance.

However, if the mural was a Keep Dunedin Beautiful project, that organisation would maintain it.

Board chairman Bill Feather said a mural would ''clean up'' the area but he was concerned it was too big and ''out of proportion''.

''All the murals in Dunedin are large and they are there to be seen. If you get too small, then it gets lost.''

The board passed a resolution for concept plan four to be accepted for community consultation.

The consultation would seek ideas on the mural design.

Member Blackie Catlow was the only member against the resolutions.

Mr Catlow wanted a concept where the table was moved within the site.

Edwin Harley, the owner of 141 Gordon Rd, where the mural would be painted, said he supported the project as long as he approved of the final design and he did not have to pay for anything.

He would withdraw support if he had to maintain the mural.

''It won't be my responsibility.''

For his approval, he had two conditions: Commercial tenants could continue advertising on the wall and the beech tree was regularly pruned by the council.

''It leans over my building and the leaves fill up the spouting and block the drains.''

The building contained two commercial tenants and a residential three-bedroom townhouse, he said.