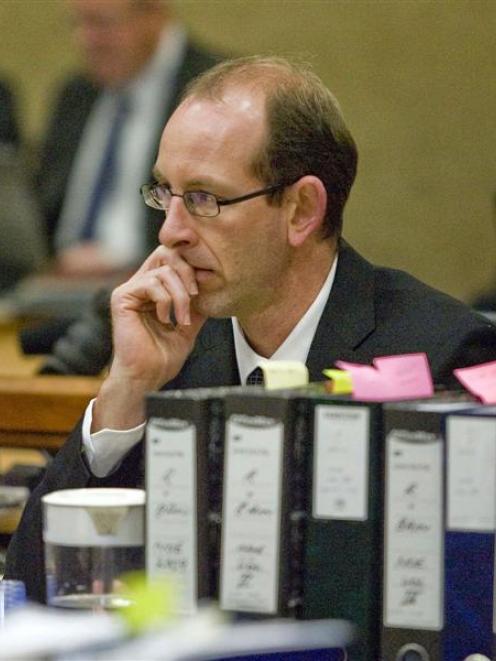 David Bain at his retrial, High Court, Christchurch, yesterday. Photo Pool.
The Crown says the defence has made a fundamental change to its fingerprint evidence in the David Bain murder retrial in Christchurch.

Crown laywers say they were unaware of the changes until British fingerprint expert Carl Lloyd was called as a witness yesterday.

Mr Lloyd is now going to have to complete his evidence by video-link from the UK next week.

Mr Lloyd's clear evidence was that David Bain's fingerprints on the forestock of the .22 rifle used to kill five members of his family were not in blood.

The Crown says the prints were in blood, possibly from Stephen Bain, who was involved in a violent struggle before he was shot on June 20, 1994.

His parents and two sisters were also murdered that day and the Crown says 37-year-old David Bain was the killer, while the defence says it was the father, Robin Bain.

Mr Lloyd gave detailed evidence yesterday and today about the various chemical processes involved in testing finger prints and said the prints on the murder weapon were latent - made in sweat - rather than made by fingers with blood on them.

But Crown counsel Kieran Raftery asked Mr Lloyd if he was aware that, for years, the defence case had been that the fingerprints on the rifle were in animal blood and that they had been there for a long time.

He was not aware of that, Mr Lloyd said. And he was adamant the prints were not in blood, human, animal or any other type.

They were latent prints but could very well be in some other contaminant, Mr Lloyd said.

All he had done was look at the fingerprint aspects of the case as requested.

Mr Raftery then told Justice Graham Panckhurst the Crown would need time to check all the fingerprint evidence with its experts and asked that cross-examination be delayed until some time next week.

Bain's retrial for the 1994 murders is now in its final stages, with defence evidence expected to be completed some time next week .