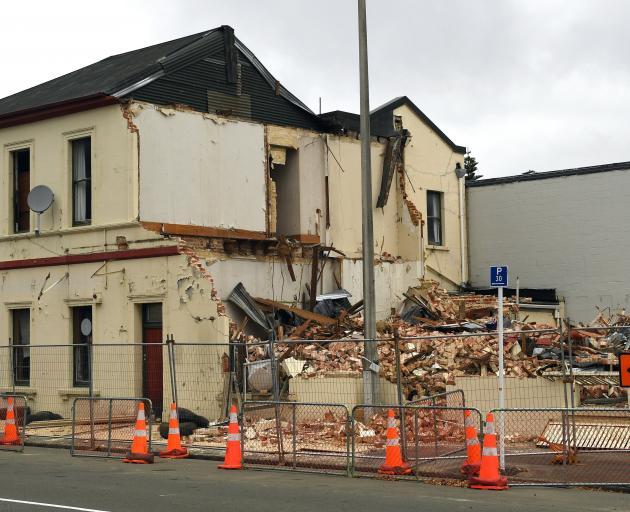 Demolition work started and then stopped at the former Scribes bookshop in North Dunedin. PHOTO: STEPHEN JAQUIERY
Demolition work has been halted at the site of a former Dunedin bookshop because the developer should have a building consent.

The developer of the site that once housed the Scribes shop and accommodation units in Great King St may also have breached rules about disturbing archaeology.

The history of the buildings dates back to the 19th century.

The Building Act allowed exemptions to the need for a building consent, including for some types of demolition, but this applied only to standalone buildings, a Dunedin City Council spokesman said.

The site has a party wall with an adjoining building.

Council staff had contacted representatives of the site owner and the demolition company working there and they agreed to stop work until the building consent issue had been resolved, the spokesman said.

This had not been obtained, he said.

Mr Tan said the party wall requires a separate consent to be demolished, so we are waiting for it before we continue.

This would be complemented by a communal roof-top garden.

The masonry-clad building at the corner of Great King and St David Sts was most likely constructed in the late 19th century, a heritage report states.

It was used for both commercial and residential purposes and its occupants included an umbrella manufacturer, a piano teacher and furnishing shop.

The second-hand bookshop Scribes had been there since the early 1990s.

It turned out to be in poor shape and he said he had little choice but to proceed with demolition.

"The plan detailed in consent documents involved creating another commercial premises, 10 accommodation units and parking" err it's got parking in the plan, hawkins wont be happy, I doubt the guy will be able to get consent if there is parking involved.