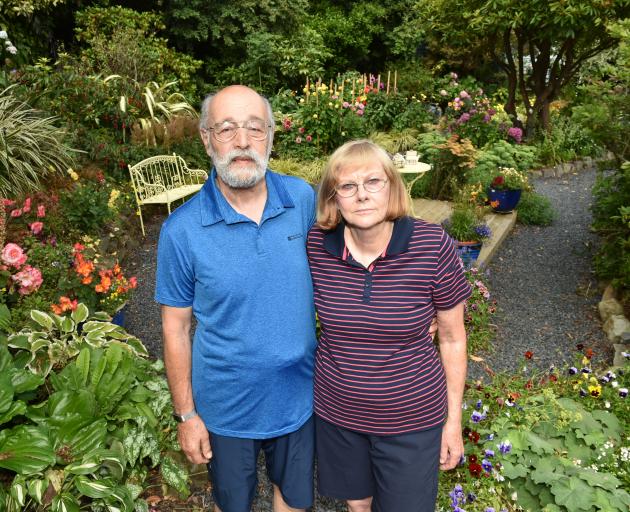 Alex and Cathy Shemansky, who own the Castlewood Cottage bed and breakfast in Company Bay, on Otago Peninsula, have been repeatedly flooded by stormwater problems not of their making. Photo: Gregor Richardson
Cathy and Alex Shemansky are supposed to be enjoying a golden period in their lives.

However, since 2015, the retirement-age couple have repeatedly been in clean-up mode following the flooding of their Otago Peninsula property.

The pair, who own the Castlewood Cottage bed and breakfast in Company Bay, have had parts of their home, cottage and gallery inundated, and their garden devastated, by floods in 2015 and 2017.

The damage had left them at least $40,000 out of pocket, even after an $80,000 insurance payout, Mrs Shemansky said yesterday.

The toil of moving furniture, filling sandbags and shovelling out contaminated mud had also taken a physical toll - a back injury for Mr Shemansky (74) and a torn shoulder tendon for Mrs Shemansky (68).

The couple have also had to cope with the stress of insurance claims, and the fear of the next flood striking.

''Having worked hard all our lives, these may be our last few active years.

''We don't want to spend them worrying about floods,'' Mrs Shemansky said.

The couple were flood-free until 2015. Since then, four significant storms had led to their property being flooded, which Mrs Shemansky blamed on more stormwater being collected within a 10ha catchment around their property.

The water went into a Dunedin City Council-owned stormwater system and was then supposed to flow through a privately owned 30cm-diameter pipe under the couple's garden.

The pipe was council-approved and in good order, but was being overwhelmed as stormwater volumes increased.

She suspected changes elsewhere in the catchment were exacerbating the problems, making it a ''catchment issue'' for the council to address.

She did not blame council staff, who had agreed to fix the problem at the council's expense, but she was frustrated by the slow progress since then.

The council's decision to support property owners like them was good news, Mrs Shemansky said, but she hoped to see action soon.