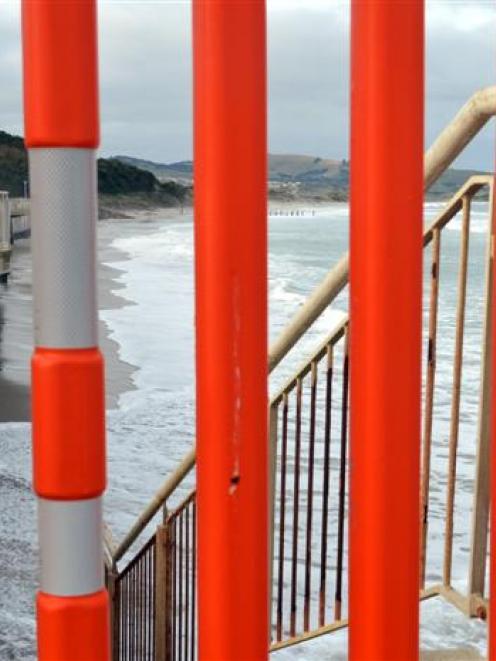 The move, subject to final approval, would involve a mix of monitoring and regular maintenance in the area while more detailed work on a long-term solution continued.

However, council infrastructure and services general manager Tony Avery was quick to pounce on any suggestion the council was moving towards constructing a groyne to protect the beach.

Council maintenance engineer Peter Standring told the meeting that was an option favoured by consultants, as it could straighten out waves which otherwise approached the beach at an angle, stripping sand from the area.

Better protection of the beach would also allow more sand to be dumped in the area, to build up the beach and protect the sea wall behind, he said.

However, Cr Neville Peat questioned that approach, saying any change to waves at the popular surf spot would ''ring alarm bells'' among the surfing community.

Mr Avery interjected to stress there was no proposal on the table for a groyne or any other offshore structure.

The idea was among ''potential options'' identified, but all needed to be considered in more detail, he said.

The interim risk management plan was designed to protect the area while that work continued. ''This is not a report that's proposing anything else. We are going to have to do more work,'' he said.

The council was at stage one of a four-stage approach to rectifying problems at St Clair, and had asked Opus International Consultants to study possible long-term solutions to the problem.

Those were expected to be discussed at next year's long-term plan budget discussions.

However, Opus' stage one report, tabled at yesterday's meeting, outlined possible options, including an offshore breakwater, which it said was a proven way of dissipating waves and retaining sand.

However, a breakwater could also have a ''significant detrimental impact'' on surfing in the area, it warned.

Earlier, Cr John Bezett had urged council staff to consider beach replenishment as an option for the area, as was done in parts of Australia.

More sand in the area between the St Clair Salt Water Pool and the beach's piles would protect the sea wall, meaning damage like last year's sinkholes could be avoided in future, he said.

Mr Avery said Opus had concluded sand was not disappearing from the area for good.

Building an offshore groyne or other structure could reduce wave energy and help hold sand at the beach, but its construction would also be a ''fairly significant'' decision, he said.

Cr Bezett disagreed, saying ''if the sand's not there, it's gone somewhere''.

The debate came after last year's severe storms stripped sand from the beach, triggering sinkholes along the Esplanade at St Clair, which had since cost the council $680,000 in emergency remedial work.

In the meantime, the interim plan would allow council staff to monitor the wall, looking for further signs of deterioration.

That would include checking and rearranging rocks at the foot of the wall every six months, and drawing up an emergency contingency plan to respond to any future partial failure of the sea wall or rock revetment.