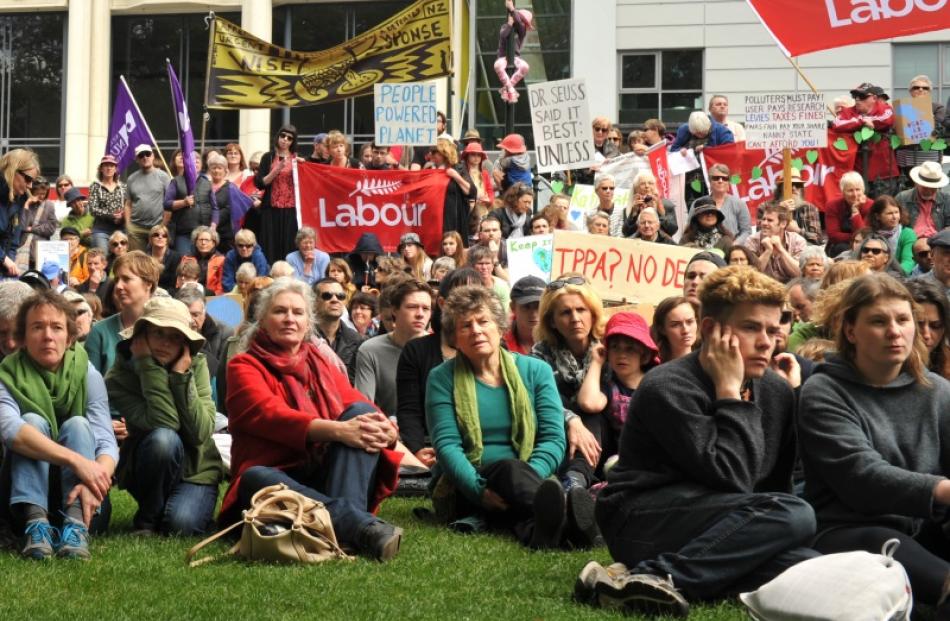 People who marched to bring attention to climate change gather in the Octagon Dunedin on Sunday. Photo by Christine O'Connor.

The Dunedin City Council voted in four climate change resolutions yesterday aimed at changing the way the city, and the country, approached the issue.

The resolutions, brought before the council by Crs Aaron Hawkins and Jinty MacTavish, state the council will:

• Urge the Government to adopt a tougher carbon emissions target.

• Support the Government in that goal by reducing Dunedin's carbon emissions.

• Join the international ''Compact of Mayors'' agreement to measure and reduce emissions across Dunedin.

• Ask the Government to place a moratorium on deep sea oil and gas exploration.

Cr Hawkins presented the resolutions by calling climate change ''the biggest issue of all time''.

They were not radical resolutions, he said, and simply sought to commit Dunedin and pressure the Government into taking a more meaningful approach to the issue.

But some councillors objected to that view.

Cr Andrew Whiley said climate change was a problem needing to be addressed first and foremost by the world's biggest polluters, including China and India.

If Dunedin wanted to make a difference, it should champion ''green tech'' - developing and producing new ways of doing things with a smaller carbon footprint.

Cr Andrew Noone said Dunedin would be better off ''walking the talk'' than telling the Government what to do.

Cr John Bezett said the issue was one for central Government, and Dunedin was ''wasting our time'' giving its opinion.

But that view was rejected by Cr Richard Thomson, who said grass-roots pressure was what drove governments to make big decisions.

''If anybody thinks that apartheid in South Africa collapsed because governments took actions in the interest of human rights, they're deluding themselves. Apartheid collapsed because a whole lot of people at grass-roots level said this is just morally wrong.''

That same pressure now needed to be applied to governments on climate change, he said.

Cr David Benson-Pope brought cheers from the gallery for his speech on why Dunedin had to take a stand.

''Like it or not, colleagues, we are part of our community. In fact, we are supposed to be some of the carriers of the moral leadership.''

''There was no question what thousands of New Zealanders thought about the issue during the weekend's climate change marches,'' he said.

''They think this community needs to move.

''I agree with them, and I'm not reluctant to ... tell the Government it's time that they got real and re-established a degree of political integrity and moral fibre on this issue.''