Council to vote on next cycleways 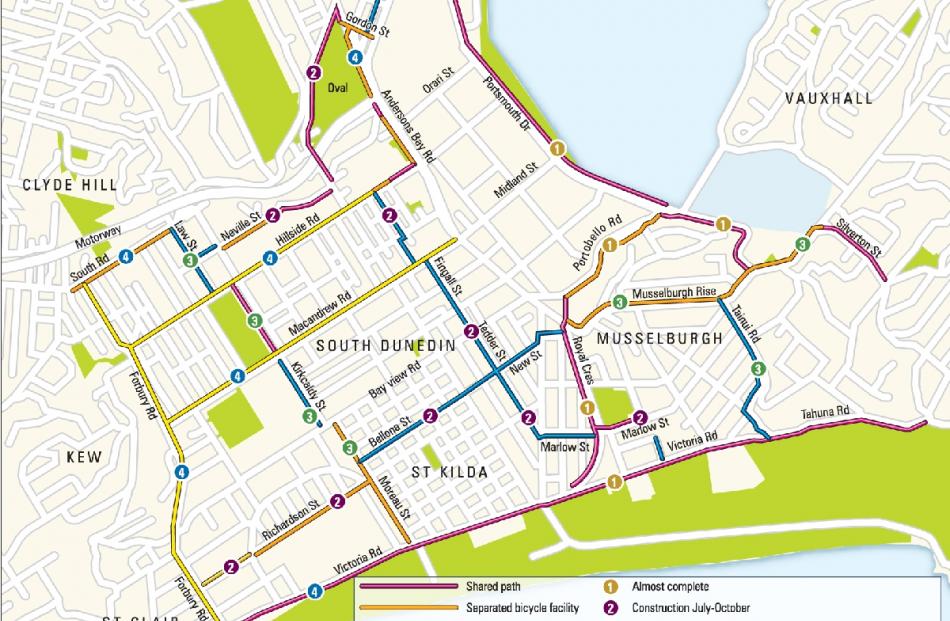 City councillors will vote today on changes to the next set of cycleways to be built in South Dunedin streets.

The South Dunedin Cycle Network, the first of several cycle networks that will eventually link the city, is being designed and built in four stages.

The first stage, made up primarily of new shared cycle/pedestrian paths, is nearly complete.

The next two stages will introduce more ''quiet streets'', similar to what had already been started in Marlow St, and separated bicycle facilities (SBFs) in South Dunedin streets.

The second stage of the project is being tendered at present, for SBFs in Coughtrey St (north side) and Richardson St (south side), to be built between July and October this year.

Bellona, New, Fingall, Tedder and the remainder of Marlow and Rugby Sts will also be turned into quiet streets.

Neville and Wilkie Sts will also receive some treatment. An SBF and shared paths are planned and the path beside the Oval along Princes St will become a shared path with cyclists, as opposed to the expensive original plan of building a new path around the other side of the sports fields.

The third stage of the project, the construction of which will begin in September this year, involves the construction of SBFs in Musselburgh Rise and Moreau St, shared paths in Silverton St and quiet streets in Law and Kirkcaldy Sts, and Tainui Rd.

The quiet street plans will result in more changes of the kind that upset Marlow St residents earlier this year, when they found the entrance-exit to their street from Royal Cres had become an exit only, and they had to alter their travel plans to enter the street.

Councillors had already approved most of the routes for the network following city-wide consultation last year.

They are being asked today to consider several route/cycleway type revisions resulting from detailed design work and consultation with affected parties.