'Cover-ups, denials and lies': Abuse redress too late for some 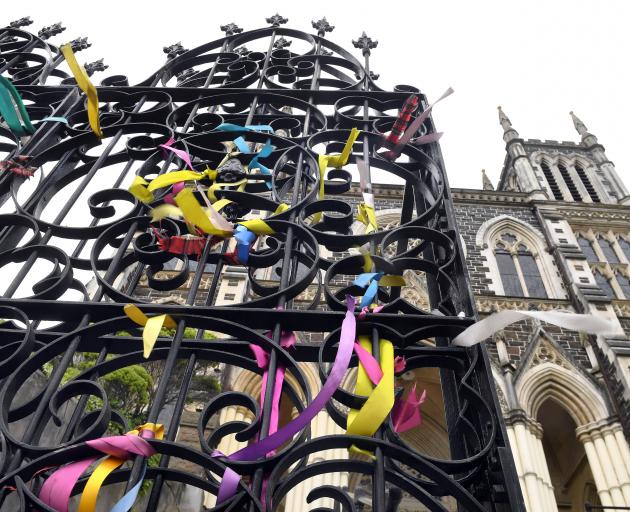 Ribbons symbolising solidarity with abuse survivors are tied to the gates of Dunedin’s St Joseph’s Cathedral. PHOTO: STEPHEN JAQUIERY
Southern abuse survivors have described the "cover-ups, denials and lies" they have battled through to get redress for their suffering at the hands of the State.

The Government has committed to a new, independent redress system following the release of the Royal Commission of Inquiry into Abuse in Care’s damning report, He Purapura Ora, he Mara Tipu — From Redress to Puretumu.

The large report featured 95 recommendations about improvements required to improve the way abuse claims were dealt with, describing the current system as "unquestionably failing" survivors.

The report outlined the need for a new scheme to be established to restore the power, dignity and standing of those affected by abuse in care.

It recommended the Government make a formal apology to survivors.

The commission has previously estimated hundreds of thousands of people could have been abused while in care between 1950 and 1999.

The trauma of the abuse was far-reaching, and changes will come too late for some survivors.

They include a terminally ill man who was abused in Dunedin, considered one of the country’s main centres for child sexual abuse.

The report featured a raft of personal stories from survivors about their experiences, including multiple accounts of abuse in Otago and Southland.

One was Marc Sinclair (54), who grew up in Dunedin.

Mr Sinclair had suffered from severe anxiety, somatic disorders and alcoholism, and had previously made attempts to take his own life.

When he decided to come forward about the abuse the Catholic Church directed him to Christian Brothers Oceania.

After a difficult negotiation process, a settlement of $65,000 was agreed, plus up to $5000 to seek independent legal advice. He was also sent a letter of apology.

A year later, in desperate need of more support and rehabilitation treatment, he again approached the Christian Brothers for assistance with going to an addiction treatment centre, but this request was turned down.

After discussions with Bishop of Dunedin Michael Dooley, about the abuse by Father Kean, the diocese, after an initial offer of $25,000, agreed to a payment of $50,000.

At Mr Sinclair’s request, the diocese also agreed to establish a scholarship to fund the education of an under-privileged student at Dunedin’s Kavanagh College.

Another survivor, Des Hurring, spent five years under Department of Social Welfare supervision as a child before being sent to Lookout Point Boys’ Home in Dunedin for theft in March 1976, where he was subjected to emotional, physical and sexual abuse.

In 1977, Mr Hurring was sent to Kohitere Boys’ Training Centre in Levin, where he suffered more abuse.

He described both places as creating "violent offenders, just like a production line, ready to move on through the prison system".

He later started drinking heavily and used drugs, and spent time in prison before getting his life back together.

In 2004, when he was in his 40s, he contacted law firm Cooper Legal to try to get redress for the abuse.

He went through a lengthy process, which included waiting more than a year for the ministry to hand over copies of his Department of Social Welfare records.

In 2016 he accepted $12,000 offered through the ministry’s fast-track claims process, but was critical of its "cover-ups, denials and lies".

"I did not take this case to get compensation. I was expecting MSD to admit the wrongdoing done against me. I was also expecting a real apology from the Government, and criminal charges being laid against the perpetrators."

"For me, this comes way too late."

The commission found the current redress processes for survivors were "unquestionably failing to produce fair, consistent or adequate outcomes for them and others affected by abuse in care". "They are not designed in conjunction with survivors and affected communities or guided by any consistently applied principles, they fail to meet the needs of survivors, and they do nothing to prevent further abuse."

Public Service Minister Chris Hipkins said it was a national disgrace that it had taken as long as it had to get to this point.

Discussions about how the design process could work would begin early next year and more detail will be shared from that point, Mr Hipkins said.

Final decisions about how the new system will work will likely be made in mid-2023.