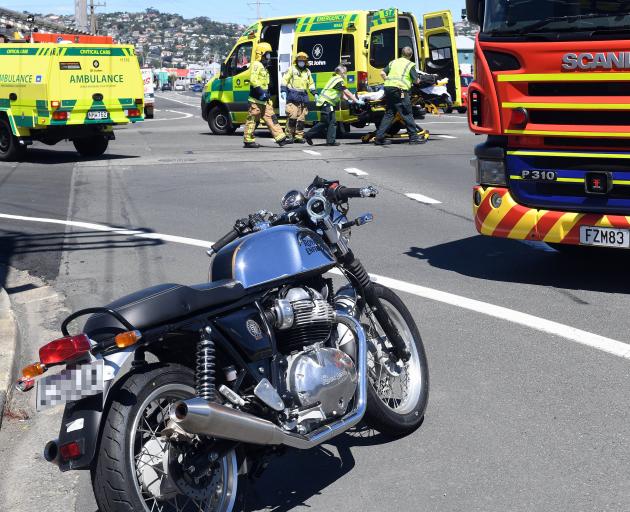 A motorcyclist was taken to hospital after he was hit by a car near the intersection of Otaki and Orari Sts, Dunedin. PHOTOS: STEPHEN JAQUIERY
Boxing Day crashes kept emergency services in Dunedin on the move yesterday.

The spate of crashes around the city did not result in further deaths, after a fatal crash in Waihola on Christmas Day.

But police urged drivers to focus on safety after the national road toll reached five yesterday in the first three days of this year’s Christmas holidays.

The driver who was killed following a collision between a truck and a car north of Waihola on Saturday morning was the fourth road death of the holidays.

A Lewis Pass truck crash about 3.30am yesterday took the road toll to five.

Police Assistant Commissioner Bruce O’Brien said it was too early to determine the causes of this year’s holiday crashes, but previous experience suggested speed, poor decision-making, distractions and lack of restraints were likely factors. 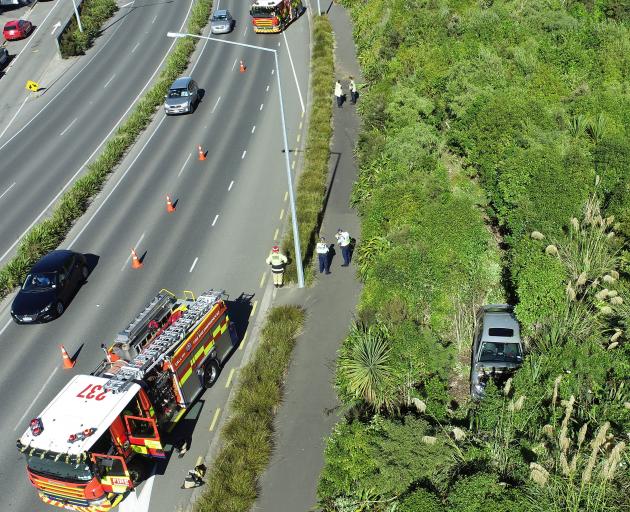 A car ploughed through roadside vegetation after leaving the motorway below Lookout Point. Firefighters used a chainsaw to get to the occupant.
Police expected the roads to be busy again today as people left the places they had held Christmas celebrations and headed to holiday destinations, Asst Comm O’Brien said.

He urged drivers to focus on safety by planning ahead, watching speeds and following distances, paying attention to conditions, stopping and resting if required and allowing plenty of time, "especially if you are travelling on roads you don’t know".

"This has been an incredibly tragic start to the holiday period on our roads and a number of families will never be the same.

"Please keep calm and be patient on the road, and accept there will be some delays on your journey," Asst Comm O’Brien said.

In Dunedin yesterday a person was taken to Dunedin Hospital in a moderate condition after their car left State Highway 1 and crashed into bushes near the Lookout Point fire station about 8.30am.

Several hours later, a motorcyclist was taken to Dunedin Hospital in a moderate condition after a collision with a car near the intersection of Otaki and Orari Sts, in South Dunedin, about noon.

Police attended a third crash about 2.40pm yesterday after a car crashed into a bank in Outram-Mosgiel Rd. No further details were available, a police spokeswoman said.

The official Christmas-New Year’s holiday period on New Zealand roads ends at 6am on January 5.