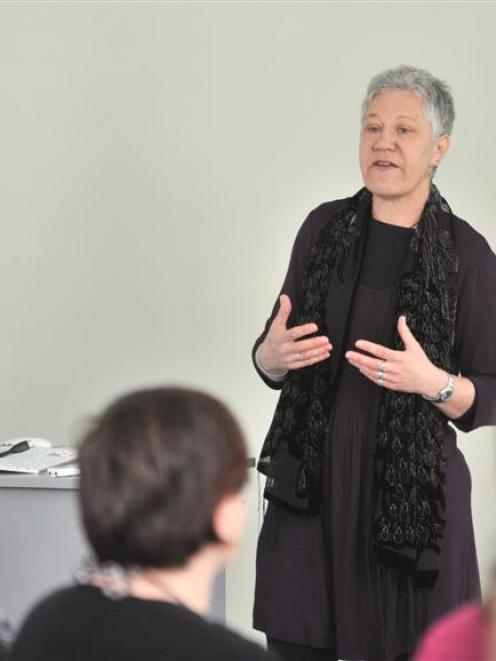 Nicola Atwool, a senior lecturer in the University of Otago department of sociology, gender and social work, discusses proposed new legislation to protect vulnerable children. Photo by Linda Robertson.
Despite some positive features, the proposed Vulnerable Children's Bill is likely to generate many extra costs, and fails to address the wider poverty issues adversely affecting many children and their families.

That view was put forward by University of Otago social work senior lecturer Nicola Atwool at a public seminar on campus yesterday. The 90-minute talk and related discussion on the proposed legislation and its ''implications for social work'', was attended by about 40 people, as part of a social work continuing education seminar series.

Dr Atwool was ''very disappointed'' with some aspects of the Government's approach, including its reluctance to address more fully the effects of serious inequality on children.

Research had shown that poverty and inequality adversely affected many people throughout their lives, she said.

An earlier Green Paper for Vulnerable Children consultation process had demonstrated ''widespread interest in the central theme of ensuring that `every child thrives, belongs, achieves','' she said.

There had subsequently been a Children's Action Plan, a White Paper and now a proposed Vulnerable Children's Bill, which had received its first reading in Parliament in September, and had since been referred to a select committee.

''At every step of the process, we appear to have moved away from the vision of `every child','' she said.

Instead, the focus had narrowed to an ''ill-defined group of vulnerable children'' rather than the wider overall group of young people adversely affected by poverty, and there was also less emphasis on the prevention and early intervention highlighted in earlier documents, she said.

Dr Atwool served as principal adviser at the Office of the Children's Commissioner from 2006 until she resumed an Otago University post last year.

She noted that the Bill introduced a new requirement for government chief executives in ministries and agencies dealing with children to ''collectively develop, and report on a vulnerable children's plan''.

The overall aim to increase interagency collaboration was positive, and the Bill's ''holistic'' approach to children's needs was also necessary.

A key consideration for adults dealing with children in a wide range of contexts was to take personal responsibility for keeping them safe, rather than assuming some other person or agency would do that.

Some proposed new requirements, including the need to produce more psychologists' reports, were likely to prove highly costly, and the Government had already indicated it did not plan to increase overall spending in the sector, she said.