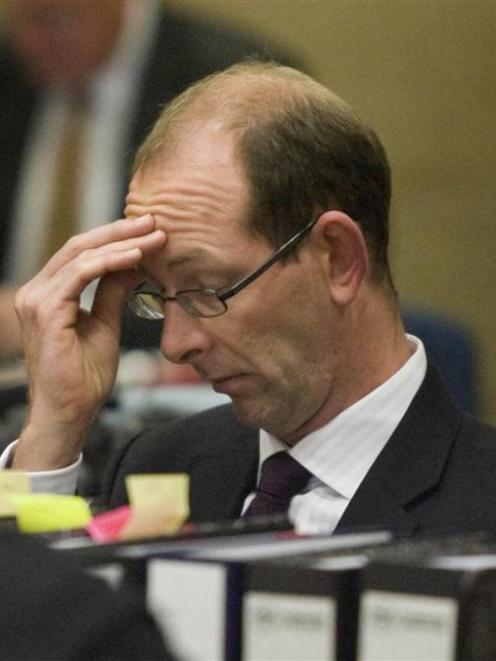 David Bain
The end of the Crown case in the David Bain murder retrial is in sight, the High Court at Christchurch was told yesterday.

The case has been running for eight weeks and Crown counsel Kieran Raftery told Justice Graham Panckhurst at the end of yesterday's sitting the last of the Crown witnesses should be finished some time next week.

The defence counsel could be calling between 40 and 60 witnesses.

The jury was told yesterday DNA from Bain's 14-year-old brother, Stephen, was found on clothing the murder accused was wearing the day five of his family were shot.

And full DNA profiles from Stephen were also present in blood samples from heavily blood-stained fabric gloves recovered from the floor of Stephen's bedroom and from several places on the rifle used in the 1994 killings.

The rifle belonged to David Bain but the jury has been told both brothers had used the weapon for shooting rabbits.

Bain (37) denies murdering his father and mother, Robin and Margaret Bain, sisters Arawa and Laniet and younger brother Stephen at the family home in Every St, Dunedin, on June 20, 1994.

ESR forensic biologist Sally-Ann Harbison, giving evidence on the 36th day of the retrial, described the DNA profiling tests she carried out in 1997 when the case was being reviewed.

She was able to establish DNA profiles for all of the Bain family members from reference samples.

Those were then compared with any DNA profiles she obtained from staining on various items of clothing as well as from the .22 Winchester rifle and from a green curtain from the front lounge.

Stephen's DNA was also found in a blood stain from the crotch of the accused's black rugby shorts, as well as in a stain on the lower back of Bain's T-shirt.

He was wearing those items the morning of the shootings.