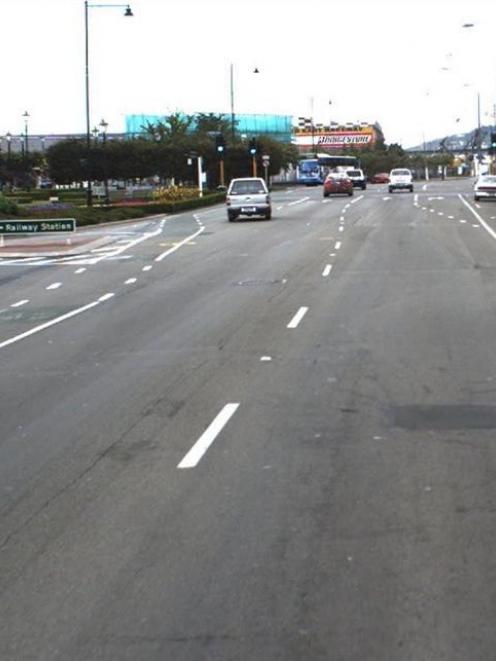 Anzac Ave intersection. Photo by ODT.
A Dunedin cycle lobby group says a New Zealand Transport Agency proposal for a central city intersection where a cyclist was killed will do little, if anything, to actually improve safety, despite that being the objective.

The NZTA wants to make the current temporary arrangements permanent.

Spokes Dunedin secretary Robert Thompson said the NZTA had gone against advice from Spokes on how to improve safety for cyclists at the intersection of Castle St and Anzac Ave, where cyclist Peter Wells was killed in November 2011.

He said video evidence collected by Spokes in July last year showed temporary changes made by NZTA did not appear to prevent or discourage dangerous driver behaviour.

Video taken last week showed, despite further changes made to the temporary layout, the standard of safety had not really been increased, especially for cyclists.

Spokes was invited in January to comment on two permanent options proposed by the NZTA: to make permanent the temporary layout, or create a cul-de-sac for Anzac Ave, closing it to through vehicular traffic.

Based on evidence the group collected in July, subsequent informal observation and feedback from cyclists, Spokes strongly recommended the cul-de-sac option.

The NZTA's decision to leave Anzac Ave open to traffic as per the temporary layout - following consultation with businesses in the area, which overwhelmingly wanted it to stay open - compromised the widespread support for improving cycling conditions in Dunedin, Mr Thompson said.

Despite Spokes attending meetings with council and NZTA engineers and road traffic planners about ''quick fixes'' for improving cycle safety in the central city, Anzac Ave had never been raised and the group could not endorse the NZTA's proposal.

Spokes would attend today's council infrastructure committee meeting, which is open to the public, and had written to councillors to make them aware the NZTA proposal for Anzac Ave did not put safety first, Mr Thompson said. NZTA manager for the project Simon Underwood said he intended to discuss the issues and reasons for the NZTA's decision in full at today's meeting.