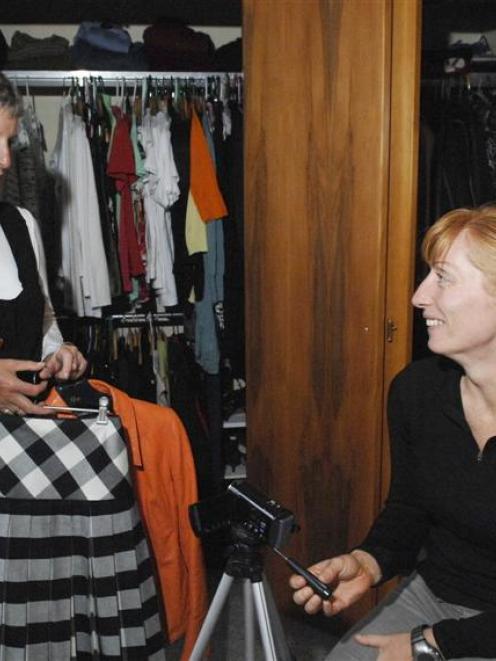 Judy Robinson (left), of Opoho, shows University of Otago marketing researcher Dr Shelagh Ferguson the contents of her wardrobe. Photo by Linda Robertson.
What secrets are lurking in Dunedin wardrobes?

Garments which have not fitted since the 1980s, expensive designer clothing too good to throw out, clothing now more memento than functional, shoes which were once the perfect fit and colour - University of Otago marketing researcher Shelagh Ferguson wants to hear about them all.

In a transtasman project, she and Dr Alistair Tombs, from the University of Queensland Business School, are trying to discover more about how emotion drives clothing purchase and wearing decisions.

And why people get so attached to certain items they find it emotionally traumatic to part with them.

They have begun filming people while they examine the contents of their wardrobes and explain their fashion successes and disasters.

The interviews - all with women so far, although she would love to talk to men, too - have already proved fascinating, Dr Ferguson said.

"People certainly are not logical when it comes to buying or wearing.

They have a real emotional connection to their clothes. . . .

It is interesting that we have managed to imbue so much meaning to fabric and leather, to what is ultimately just stuff."

Loved possessions usually had stories attached to them, she said.

"People said things like: `My grandmother gave that to me and it is a treasure', or that they wore it to a special occasion or happy event.

"Wedding dresses and baby christening shawls fall into that category."

Others told her they liked particular garments because they expressed their fashion style or made them feel good.

"Clothing is an extension of how we see ourselves.

People said a particular dress was `so them', or they can't imagine what they were thinking when they bought something else because it wasn't their style at all."

Dr Ferguson met Dr Tombs when he was an undergraduate at Otago some years ago and they decided to collaborate on the wardrobe project.

They were inspired by a UK television programme also screened in this country in which a fashion consultant cajoled and sometimes browbeat women into updating their wardrobes and throwing out whatever was past its use-by date.

The researchers plan to edit their research into a documentary film.

And the obvious question: What secrets are lurking in Dr Ferguson's wardrobe?That was easy, she said - a very expensive Christian Lacroix suit given to her by a friend which she felt guilty about disposing of even though she had never worn it, and a pair of PVC snakeskin pants, circa 1995, with which she had only recently managed to part.

"They reminded me of the years I enjoyed wearing them.

"I realised that at 41 I was probably never going to wear them again, but parting with them caused regrets.

"Not regrets that I was never going to wear them again, but regrets about the passing of time."