DCC urged to consult on harbourside 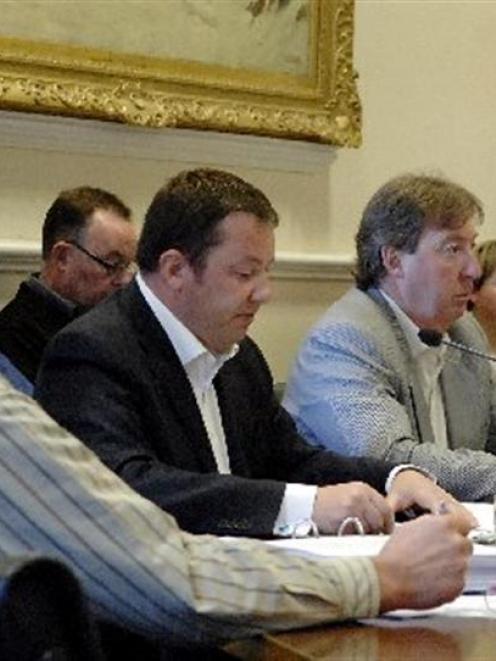 Otago Chamber of Commerce chief executive John Christie (left) and president Mark Willis, put forward their members' case for the Dunedin City Council to restart the consultation process on harbourside rezoning. Photo by Linda Robertson.
Dunedin's harbourside rezoning proposals should be stopped and go back to the drawing board for more consultation, the Dunedin City Council draft annual plan hearing was told yesterday.

Otago Chamber of Commerce chief executive John Christie and president Mark Willis, who represent about 1500 Otago businesses, made the call in their joint verbal submission.

About 35 representatives of the 100 harbourside businesses filed into the meeting room for the 30-minute presentation, leaving standing room only.

"We do not believe from our work that those [harbourside area] businesses occupying leasehold land, the majority, have been consulted in a reasonable and meaningful way, despite the council's statutory duty to do so," Mr Willis said.

Mr Christie said their submission asked the DCC to stop the legal processes "which we have been advised you can do", and initiate consultation and dialogue with the stakeholders in the community.

A month ago, the chamber and five companies launched an Environment Court challenge against the council's district plan change, which was approved in mid 2008, to switch zoning from industrial/port to harbourside, allowing cafes, restaurants and apartments in the area.

While the chamber overall supports the long-term harbourside redevelopment, it is opposing the immediate plan changes which it believes will affect jobs and alter land values.

Mayor Peter Chin said yesterday's hearing was not an open forum for discussion, but that option would be available to the chamber later.

Mr Christie said the Environment Court challenge could be dropped in preference to the council stopping the rezoning process and establishing a "partnership forum", including councillors and the chamber.

However, Cr Richard Walls said the chamber should go through the Environment Court process, at which time it could then come back to council.

In response to questions from councillors, chamber member Lindsay Kaan, Kaan's Catering Supplies managing director, said about 80% of his business was in a 4km-5km radius of his present site, which he owned.

He had been asked by the council if he would consider shifting, but was never offered a site.

After the submission, Mr Kaan said he had considered moving the family business to Christchurch where it had a branch office.

The business, which operated six and a-half days a week, had been established in 1991 and employed up to 50 people.

However, the family preferred Dunedin and was set to expand the company by installing a 350-pallet coolstore.

Mr Christie cited the findings from a McDermott Fairgray Group report, commissioned by the council in late 2000, which found a harbourside rezoning "to attract new land uses" would have "significant effects on in-situ industries" and "adversely affect" them "at a local and possibly even regional level".

The report said "were such a disruption to occur", the affected businesses would require "adequate provision for alternative accommodation" to ensure the city did not lose the benefit of "employment and contribution to domestic output".

Mr Willis called for the council to set up a "partnership forum" at councillor level to find a strategy to permit the harbourside development to proceed "without the impacts on jobs and wealth creation".

"The concept of ratepayers not being permitted to seek other changes to the development, other than those initiated by the council, is repugnant to the democracy we all cherish."