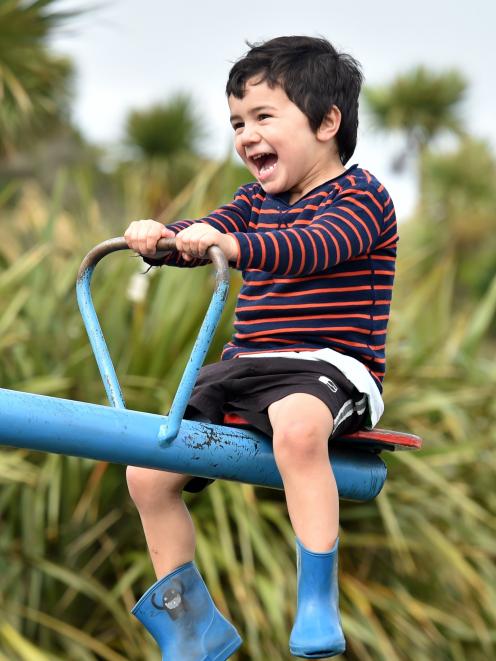 Mahe Fangupo (3), of Dunedin, enjoys the see-saw at Marlow Park playground. PHOTO: PETER MCINTOSH
For the first time in nearly 15 years the public will be consulted on the future of Dunedin’s playgrounds.

A" play space plan" is being undertaken by Dunedin City Council parks and reserves staff to focus on improving the quality of play spaces and experiences and establishing levels of provision for improvement.

Consultation will begin next month and comes during an upgrade of 52 of the city’s playgrounds.

Council senior planner Claire Swift said the last time the public was consulted on playgrounds was 2006 and since then a resident opinion survey showed there was about 74% satisfaction when it came to playgrounds.

"We know anecdotally residents are frustrated with playgrounds."

She said while 110 playgrounds and 12 skate parks was a high number, 75% did not provide for 10 to 14-year-olds and in some cases, the age or conditions of amenities was not known.

A well-designed playground had potential to support the health and development of the child.

Ms Swift said improvement of playgrounds could be aided by talking to the community and surveying them.

"We can say this is what we’ve found out, what do you think and how do you feel?"

She said there were three "destination" playgrounds in Dunedin in Mosgiel, Woodhaugh and Marlow Park — the dinosaur park — at St Kilda.

Ms Swift said she would rather look at how to enhance these destination playgrounds as opposed to constructing new ones.

"It’s down to the community and council in terms of direction we can suggest."

In Dunedin, a wide range of users were on playgrounds and one playground near the university was popular with students.

After council discussion around the age of those using playgrounds and the different types of play, Cr Jules Radich said he would like to see educational and older added to the six types of play.

All councillors were in favour of the change.

Why has no-one questioned/found out where the third stage of the Mosgiel Memorial Park playground is? Why wasn't it developed?

From memory there was supposed to be a few new attractions put in (can't remember what, but some sort of pirate ship or other largeish structure comes to mind?). But probably a decade or so has passed now, with no mention of it.

Also, Marlow Park was so much better when i was a kid. The bumper boats, ship shaped building/shops (that should never have been allowed to be demolished!), pedal (?) karts, ACTUAL WATER in the whale pool and so on.

Playgrounds these days are boring, and kids don't know what they missed out on. Even Mosgiel Memorial Park used to have a much better fort before they 'softened' it up and took some of the challenging bits out of it.

Adults suck, for taking away the cool features of these parks.

So it seems the dcc is 'consulting' the public. I will believe it when I see it.