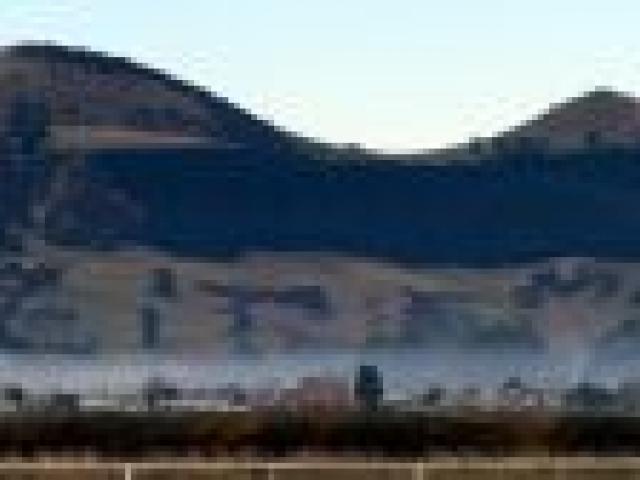 Saddle Hill (left) and Jaffray Hill. Photo by Gerard O'Brien.
All quarrying on Saddle Hill could be stopped, an interim decision by the Environment Court suggests.

The decision, released to the Otago Daily Times late yesterday, suggests a 1960 consent for quarrying on the lower of Saddle Hill's two humps, Jaffray Hill, "has no ongoing effect'' and work should have ceased over 50 years ago.

The finding also suggests the consent was likely limited to excavating 100,000cu m of rock for the building of Dunedin Airport, at Momona, and the limit appeared to be a "fundamental extent'' or "essential term'' of the consent and would have been exceeded.

A dispute over quarrying on Saddle Hill has run through the courts and attracted public anger since the 1960s.

Concerns have centred on the loss of the Taieri Plain landmark's profile.

"Those are contract by contract positions.

"Consents were not granted in volumes and the council can't produce any one of them,'' he said.

"We have a consent. We're quarrying within the circumstances.

Mr Fisher was unable to give a definitive answer to how much rock may have been excavated since work was completed on the airport in the mid-1960s but concluded it would be "in excess of a million cubic metres''.

He was pleased with the decision - ruling in favour of Saddle Views Estate Ltd - that there was no limit on where quarrying was allowed.

A Dunedin City Council submission mapped out an area thought to have been conditions of the consent but SVEL counsel Trevor Shiels QC countered by using past case law and finding council meetings and newspaper articles made no mention of conditions.

On yet another round of submissions ordered by Judge Jon Jackson in late June and into July, Mr Fisher said the situation was a "farce and reeks of injustice''.

Council services and development general manager Simon Pickford was "cautiously optimistic'' quarrying would stop after the next round of submissions.

Mr Pickford said it had been the council's "consistent view'' it wanted clarity on quarrying rights on Saddle Hill.

"What is pleasing today is that the judge has indicated that there are limits,'' he said. "What we're going to turn our minds to is if the quarry was really set up for the construction of the airport, what were the limits on that?''

Mr Shiels said he would be considering all options with his client before submissions were due. As the interim decision did not come with an enforcement order, quarrying at the site would continue, he said.

The High Court ruled in late 2014 SVEL had resource consent from 1960 to quarry Jaffray Hill, when Downer began using an existing quarry opened to provide material to build the airport.

In February last year, city councillors voted in favour of leaving the decision on resource consent conditions up to the Environment Court after no agreement could be reached with the quarry owner.

In May 2015, the court heard arguments from the council and SVEL after the two parties failed to agree on the extent of conditions and the scope of the quarrying.