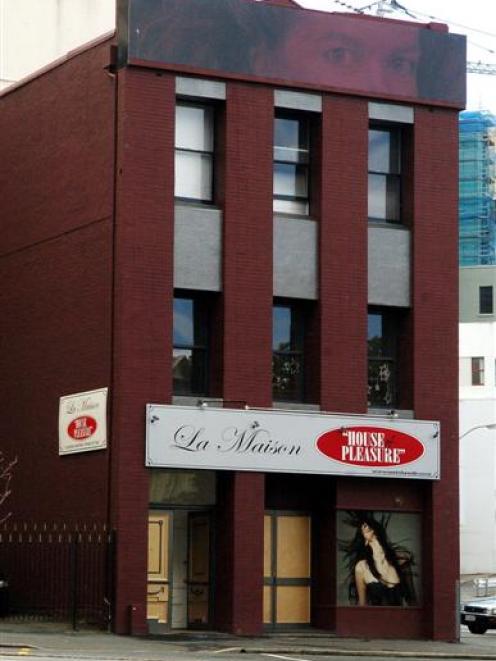 La Maison in lower High Street. Photo by Gerard O'Brien.
The owner of a Dunedin brothel says changes made by the Dunedin City Council last week to deter boy racers from terrorising its staff and clients did not stop them from congregating in the area during the weekend.

La Maison director Teena Ingersoll said the installation of a liquor ban sign in the DCC car park near the Queens Gardens brothel did not stop boy racers from drinking in the area, as they had done every other weekend.

"There were cars parked directly under the sign, standing out there partying ...

"bottles of drink in hand and in their wake [they left] beer cartons and empty RTD bottles," she said.

The council had also locked the Queens Garden public toilet between 11pm and 5am, which had only resulted in more people defecating and urinating in the car park and around the building.

The only way the council could solve the problem was to put up a chain blocking entry to the car park.

Such a move would also ease pressure on police who were doing an "excellent job", but could not monitor the car park at "at all hours".

Ms Ingersoll said she was fed up with the behaviour, which included drinking and smashing bottles, hurling verbal abuse at clients and staff, and defecating and urinating around the Queens Gardens-based property.

Kevin Thompson, of the DCC, said last week that in addition to installing a liquor ban sign and closing the toilets, the council was reviewing the lighting of the Queens Garden and Dowling St car parks.