A diver  in the middle of an underwater expedition in Otago Harbour was unaware of a search and rescue operation to locate him.

Dunedin man Kazushi Noiri began a scuba dive off Wellers Rock about 3.10pm last Monday, after letting his family know where he was going and what time he would be back. 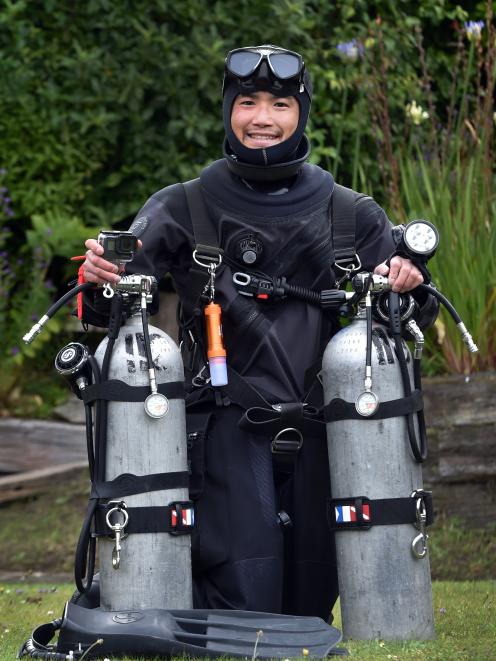 Dunedin diver Kazushi Noiri took the photo (above) of an octopus before he became the subject of a search and rescue operation. PHOTOS: PETER MCINTOSH/KAZUSHI NOIRI
He anchored his float and descended 8m, enjoying swimming with octopuses and other sea creatures as he normally did.

The 34-year-old nurse said about 100 minutes into the dive, somebody grabbed his calf.

"I had watched a scary movie the night before and thought it was some sort of underwater creature coming to get me."

In fact, it was a member of a search and rescue team that had tracked him down after a concerned kayaker found his diver’s float.

The kayaker could not see bubbles, or signs of a diver surfacing, and raised the alarm.

Mr Noiri said he slowly surfaced and saw about 15 people on the shoreline.

"I knew instantly they were probably looking for me ... I felt very sorry for what I had caused, even though I had taken those safety steps."

While he had taken precautions, including notifying friends and family, checking the weather and tides, and carrying correct equipment and float, he had since agreed to notify Dive Otago members of future dives.

"Safety is the main thing when you’re diving and I do take every precaution I can.

"I’m normally out for a longer time than many, and I can see why someone would be alarmed when they did not see me after a while."

He earned his scuba diving certification more than a decade ago, ticking it off his bucket list, but two years ago decided to take a refresher course at Dive Otago.

Since then, he had dived every day he could.

"I love that it’s a completely different world compared to what we see on land. There’s so much to see from schools of fish, octopus, crayfish and the occasional sea lion."

The longest he had been underwater was two and a-half hours.

He particularly loved diving at Aramoana.

"I would do it all the time if I could."

He had a dive trip to Picton with friends scheduled for later in the week.