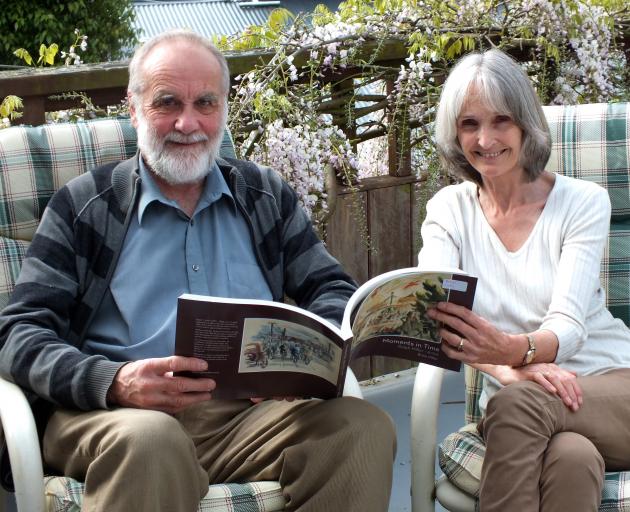 When Dunedin writer Finn Bell won the Ngaio Marsh Award at the end of October, it marked a significant breakthrough, not just for the writer but for publishing.

Bell’s thriller Dead Lemons was self-published and to win any award for a DIY book, let alone pick up a major prize, is rare.

But that is changing. With the disappearance of many smaller publishing houses, gobbled up by giants like Germany’s Bertelsmann, which owns Penguin-Random, the opportunities for getting a book published in the traditional way have shrunk. More authors have begun to produce their own books and, as Bell’s success demonstrates, they can be every bit as good as those from commercial firms.

"I believe something like 75% of books are now self-published," says Brian Miller, of Dunedin.

With his wife, Diane, Brian established self-publishing company Lifelogs in 2007. Since then, the Millers have produced 10 books, ranging from histories of Macandrew Bay, where they live, to three successful children’s picture books.

Back in New Zealand, the Millers ran Tapui Children’s Books for 20 years. Then they thought of self-publishing after "thinking about all the books that should have been published and weren’t", Brian said.

Lifelogs was the result. Memory books, which include family histories, were to be Lifelogs’ main focus but output so far has largely been responding to gaps in the market. For example, when a friend asked Brian for advice on using a complex digital camera, he realised there was no suitable book available. As a result, he utilised decades of interest in photography and cameras to produce Digital Cameras the Easy Way. Since its 2008 launch, it has sold 12,500 copies.

Other successes include Brian’s guide to the Otago Central Rail Trail and Diane’s three children’s picture stories, all with Otago themes — Gabriel’s Gully in the 1860s (Stars of Orion), Larnach Castle (Alice’s Adventures at the Castle) and everyone’s favourite steam engine (Josephine off the Rails). The latter has sold out and is about to be reprinted.

A selection of Brian and Diane’s books. As self-publishers, they publish only their own work.
The Millers emphasise that they don’t publish work by other writers. However, for those who want to follow their example and self-publish, whether a family history or a novel, they have lots of advice based on their experience.

"People come to grief because they take on their written project without thinking about how they’re going to sell it," Brian says.

"Think about what your message is and who’s going to buy the book."

Before you start writing, check out bookshops and libraries to see what else is available in your genre or topic and what size and shape (format) they are, as well as the number of pages.

"Decide roughly X pages of this size before you start writing and you must talk to printers early on,"  Brian says.

Consider how many copies you will need to print and what the selling price needs to be to break even.

Diane says: "If you print a small number, it’s expensive per book."

On the other hand, print too many and you’ll have money tied up in unsold copies.

"You’ve got to do the maths before you start writing," Brian says.

"The whole aim in self-publishing is to collect your orders as you write the book, so you should endeavour to have enough to cover printing costs before the actual printing is done and we always work with local printers."

Diane says: "Don’t be tempted to go to an overseas printer, as the freight costs and unreliable delivery are not exactly what you want."

If the book is to be a commercial one, there are other monetary factors. Bookshops take a 40% discount on the cover price (their profit) and a national distribution company requires a 65% discount (their fee and their customers’ profit). In other words, if the book’s price is $30, you will get $18 a copy selling direct to a bookshop and $10.50 if you use a national distributor. These costs need to be built into your calculations.

The Millers say it is important to make it clear from the outset that there will be no freebies to friends and family for, say, the use of photographs or diaries for a family history. Instead, acknowledge these contributions in the book.

As you write, back up everything, as a computer crash can be disastrous. Visualise all the time what the finished book will be. Keep focused on that and avoid byways, although they may make subjects for subsequent books.

If the book needs illustrations, "grabbing things off the Net" is not an option. Increasingly, there are copyright constraints and breaching them can be very expensive. Brian advises taking your own high-resolution photographs on a good camera — as he did for his Otago Central Rail Trail guide — or buying stock images from a library service such as Getty Images. Be aware, though, that there will be limits on the use of stock images.

A good cover is crucial, lifting the book to the professional level.

"It may cost several hundred or even $1000" but is well worth the cost of a professional designer, Brian says.

Ensure your book has a copyright line, usually a simple "© Bill Bloggs 2017", and an ISBN number. These numbers, issued in New Zealand by the National Library, are worldwide identifiers that help bookshops and libraries locate and order books. Add an ISBN barcode to the back cover. Without it, bookshops generally will not handle your book.

Having written your book and before printing, have two or three people read it, with one responsible for the technical proof, the Millers say. Once it is printed, money spent on a launch party is a good investment, as the hot sales period is a month from publication. A party, planned well ahead, can generate useful publicity and full-price signed copies usually sell well at such events.

Other ways to bring your book to attention are by setting up a web page, using social media such as Facebook and sending out press releases of no more than one A4 page to newspapers, magazines, radio and TV. Review copies are also an option but some publications still choose not to review self-published or vanity titles, so check first.

Traditional publishers organise publicity for their authors; as a self-publisher, it’s up to you.

As Brian Miller says: "Promotion is everything. You’ve got to make an impact, as you’re the only one doing it."

Think about the target audience (who will buy the book).

Choose the book size and shape (format) in line with similar books on the topic.

Do the maths: Talk to printers to get an idea of cost and decide how many need to be sold at what price to break even.Consider distribution options.

Write the book, staying focused on format and the target audience.

Back up all your work.

Drum up as many advance orders as possible.

Get a professional to design the cover.

I have been self publishing books for many years. Although I agree with many points in this story, some points mentioned here do not apply to my case at all, and some other important points that do apply to me are glossed over here or not mentioned at all. So, an extra piece of advice for anyone thinking about self publishing is that you *take advice from a range of self publishers*. Although there will be some common core in their answers, the advice you get may differ on some of the finer points.