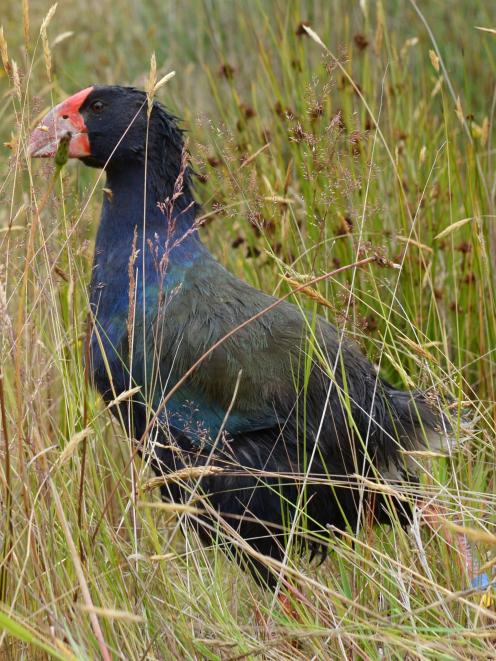 The Orokonui Ecosanctuary's female takahe.PHOTO: GERARD O'BRIEN
The Department of Conservation has defended a "non-interference" policy towards takahe after criticism following the death of two chicks at Orokonui.

The only two takahe chicks at the Dunedin ecosanctuary died last week after venturing away from their nests shortly before a flood.

Staff said they did not intervene, partly because of a policy towards the birds through Doc.

The department received "quite a lot of criticism" after the event.

However, it had such a policy as it was "the safest approach, proven over decades of bird management".

"A lot of people are saying that we want nature to take its course. What we really want to make clear is it's around the safety of birds."

If they were disturbed while it was raining, the takahe would scatter, which could cause abandonment and put "valuable adult birds at risk".

"The policy is that the birds generally know best."

The chicks died because of bad luck and "bad parenting".

However, the parents were good at learning from their mistakes.

"They can do silly things like drag them across a pond and kill other chicks.

"Takahe are hardy birds, and generally good parents, but often need to learn skills through experience. This pair may learn from this loss and do a better job next time around."

Even experienced Doc staff only interfered with the birds during dry weather.

"In general, we only get involved with any species if it's going to make a difference."