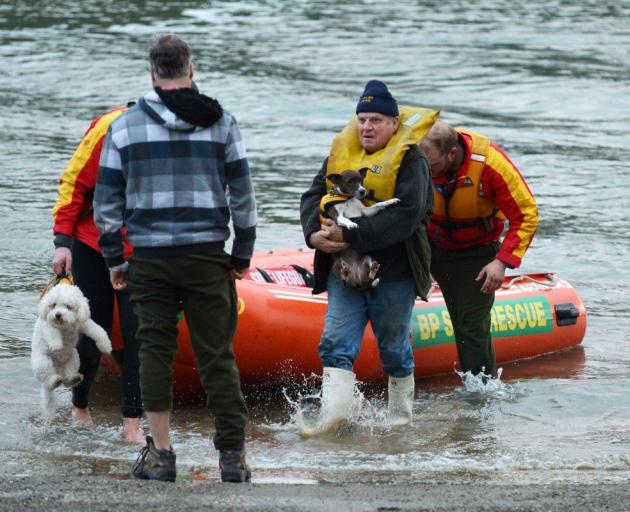 Alan Eade (71), of Taieri Beach, was plucked from frigid water by a fishing boat skipper late yesterday after he was washed overboard from his 9m boat Aida that was stranded on a sand bar.

Search and Rescue marine adviser Keith Simon said he watched through binoculars about 5pm as Mr Eade was tossed off the Aida near Taieri Island.

''It was rocking and rolling and he fell in,'' Mr Simon, of Taieri Beach, said.

Luckily, the fishing boat Juggernaut, skippered by Tony Edmonds, was passing and picked up Mr Eade, uninjured but cold.

He and his crew - small dogs Popcorn and Rudi - were aboard his wooden boat when it struck the sand bar about 7am.

''He was following another fishing boat in the dark and lost his way and parked up on the bar and decided to leave his boat there for the next high tide.''

Squad co-ordinator Seth McPhee said he and fellow lifesaver Mat Walters travelled in an inflatable boat to the stranded Aida about 8am.

''He got turned broadside by a wave and ended up high and dry on the sandbank,'' Mr McPhee said.

When they arrived, Aida was listing to its starboard side in shallow water. The rescuers brought Mr Eade and his dogs, who were wearing life jackets, to shore.

Later, Mr Eade returned to the stranded Aida in another inflatable boat, to prepare it to be refloated at high tide.

It was then he was washed overboard and again rescued.

Mr McPhee said anyone crossing a river bar must wear a life jacket.

''The skipper did the wise thing and applied that to his best mates, too.''

Mr McPhee said the sand bar was constantly changing and occasionally caught boat users out, even ''wise skippers'' such as Mr Eade.

''He was following a fishing boat out but unfortunately, mishaps still happen.''