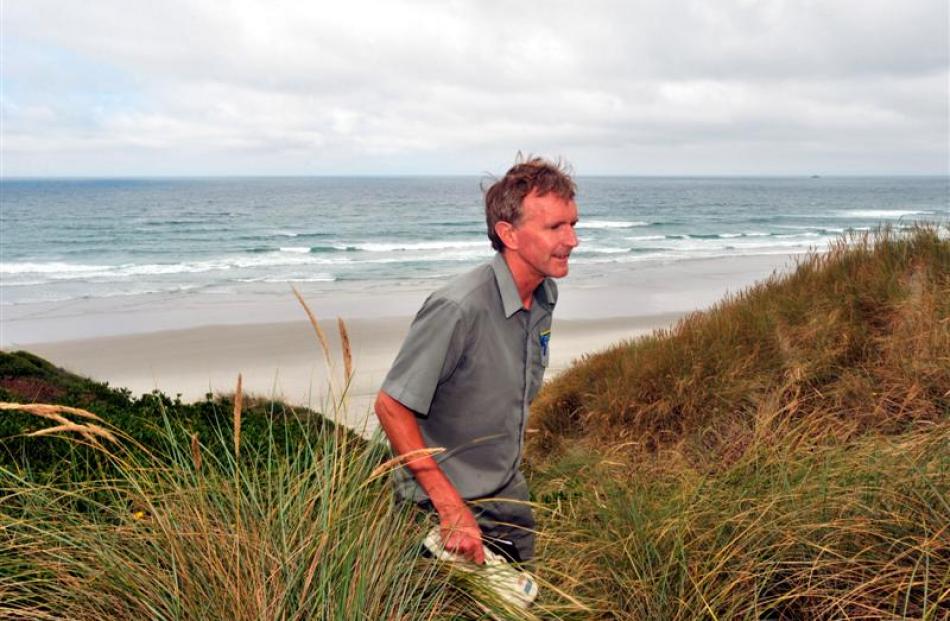 Department of Conservation biodiversity ranger Jim Fyfe searches for a sea lion pup in the sand dunes at the eastern end of Tomahawk Beach in Dunedin yesterday. Photo by Gregor Richardson.

Dogs and vehicles are temporarily banned from the eastern end of Tomahawk Beach to protect the first sea lion pup born in the Dunedin area this season.

But despite several signs on and around the beach, people have been walking dogs and driving vehicles in the cordoned-off area, to the dismay of the Department of Conservation and Dunedin City Council.

Doc biodiversity ranger Jim Fyfe checked on the pup yesterday and was disappointed to see fresh tyre tracks indicating ''donuts'' had been performed on the sand directly below where the mother sea lion had been hiding her female pup.

Under the Marine Mammals Protection Act 1978, no vehicles are allowed within 50m of marine mammals.

He said the young mother sea lion was particularly ''toey'' and a light sleeper, and should not be agitated.

Doc staff were trying to determine if she was one of two known females called Lena and Madeline, neither of which was microchipped.

The department relied on nearby residents and the wider community to report any sightings of dogs and vehicles inside the cordon, and was also being assisted by the council's dog control staff.

Volunteers were patrolling the beach regularly, as well, educating people about sea lions and the temporary cordon.

Mr Fyfe said the pup was born about three weeks ago in the sand dunes, where it had been hiding since.

The mother regularly fed out at sea, and was usually gone for between 12 and 20 hours, he said.

It would move the pup away from Tomahawk Beach once the pup was old and strong enough, which could be in another three weeks.

The pup was the third born on Tomahawk Beach in as many years, Mr Fyfe said.

In January 2012, a mother sea lion called Gem and her pup Marama were sedated and moved off the central part of the beach to a more remote location.

When Marama was about a year old she was found dead, and was believed to have been ''drowned'' by a male sea lion, Mr Fyfe said.

Another pup born last summer on the western end of the beach, which was cordoned off, died soon after from disease.

Mr Fyfe said five or six pups were expected to be born in and around Dunedin this summer.

Five were born last year, two of which died of disease.

He said all the adult females in the area descended from a sea lion called Mum, which gave birth to the first of many pups at Taieri Mouth in January 1994.