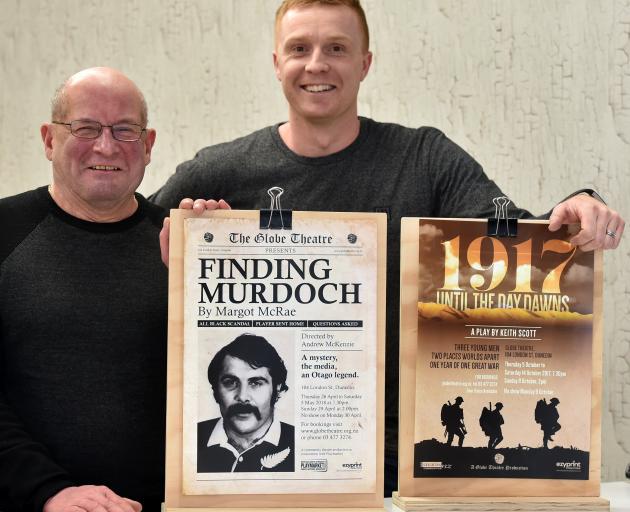 Two weeks after that, the creative skills of Mr Scott and Mr Sides brought the Globe another win when their poster for 1917: Until the Day Dawns, a play written by Mr Scott, took joint first place in the annual Theatre NZ poster competition.

Wellington Repertory shared the winning spot with the Globe and Invercargill Repertory was runner up.

Of particular significance to Mr Scott was the fact both awards won by the Globe were for posters for Otago-themed plays.

Finding Murdoch, written by Margot McRae, a play about the search for ex-All Black Keith Murdoch, was performed at the Globe in April and early May this year.

1917: Until the Day Dawns, which tells the story of three young Maniototo boys in World War 1, had a 10-day season at the Globe in October last year.

Although he had the concept for both of the prize-winning posters, it was his collaboration with Paul Sides of Ezy Print which made his ideas a reality, Mr Scott said.

``I don't have the technical skills to translate my thoughts on to paper but Paul has the expertise and the software to do that; and we think along the same lines.''

The Ezy Print team had been doing posters for the Globe for about a year.

The $1000 prize money for Finding Murdoch had been earmarked for the theatre's general production costs and would go towards buying some new theatre lights, Mr Scott said.

As well as writing 1917: Until The Day Dawns, he also directed plays and was chairman of the Friends of the Globe committee.

He was unaware of how much prize money the latest win would bring but said it would also go ``back into the Globe``.