Dream for Dandie Dinmont's future a labour of love 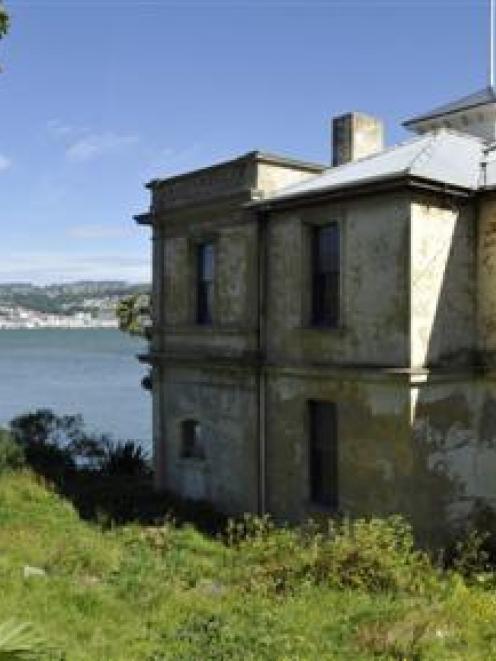 A familiar sight on the Portobello Rd for more than 130 years. Photo by Gerard O'Brien.
If owner Isobel Nikoloff realises her dream, the Dandie Dinmont will become a worthy and much-awaited addition to the Larnach legacy.

Better known as the White House, the magnificently proportioned building has stood guard on Portobello Rd at Vauxhall since 1880.

But ravaged by weather, abused by tenants and plundered by thieves, its glory days are long past.

Designed by Mason and Wales as a hotel - and named after William Larnach's favourite breed of dog, a terrier from the Scottish Borders - it never secured a licence.

Those well-versed in Dunedin history suggest this rejection was the beginning of Larnach's downward spiral to suicide.

A banker, businessman and politician, Larnach regarded the hotel as integral to his grand plan for the peninsula - a thriving metropolis served by a railway line that ran all the way to Portobello.

Instead, it became Larnach's stopover; a place to stable his horses after the ride from the castle, before a ferry trip to the city.

And an overnight retreat to share with close friends.

Rumours abound as to its use as a "gentlemen's club", in the latter part of the 19th century.

It did after all offer eight bedrooms and an impressive billiard room.

It was sold to the Stevenson sisters in 1896, who used it as a home.

It then passed to a Dunedin women's organisation, possibly a refuge, in 1926.

Ten years later, the Gorman family bought it, before selling it to Ms Nikoloff in 1969.

Experienced heritage carpenter Don Milne was deeply concerned with the state of the plaster-over-brick building when he took on the role of project manager for Ms Nikoloff about four years ago.

"Someone had started repairs but I don't think they quite understood what was required," Mr Milne said this week.

"While they did did some good things, the major concern wasn't being addressed, namely stopping the water entering the building."

That is the key to halting the decline of any building, Mr Milne said,"We started with repairs to the roof and tower and the spouting and drainpipes and exterior joinery."

The extent of the damage and urgency of the task quickly became apparent.

"It was only a matter of time before the roof collapsed and we had another Cargill's Castle scenario."

With no historic places trust or Dunedin City Council district plan listings, Ms Nikoloff would have had no alternative but to bring in the bulldozers and make the site safe.

Mr Milne began work on replacing rotten roof timbers, a task delayed when a storm blew off the temporary roof.

"That's when we had to bite the bullet.

Bruce Harvey, from Bramwells Scaffolding, was a genius in securing the new temporary roof while the original was repaired"And while we had the scaff' up, we did the structural repairs to the front, where there was cracking in the bricks.

"This plan was drawn up by engineers Hadley and Robinson and was signed off by the Dunedin City Council.

With the roof and walls weather-tight, Mr Milne next concentrated on the 27 double-hung windows, each with two sashes.

Every window was removed, its wood framing either repaired or replaced.

Windows were reglazed, where necessary, and rebalanced with new cords and appropriate sash weights.

While the frames were out, damaged window head castings were replicated and refitted.

"This is where we are so lucky in Dunedin to have specialists in heritage restoration," Mr Milne said.

He made special mention of Alistair Carson the roofing foreman, carpenter Rob Scaife, and Daniel Pollard, who carried out the plaster work.

However, he reserved particular praise and respect for the owner.

"Isobel is brave and committed and still spurred by a romantic notion of restoring it and maybe living there.

"And remember, to date all this work has been self-funded."

Though Mr Milne declined to put a figure on the cost of repairs, industry estimates suggested little change from $100,000.

The recent landslip at the rear of the building in Doon St has highlighted the need for further urgent spouting and drainpipe work.

However, Mr Milne is ready to proceed with the next big push- the completion of cosmetic repairs to the exterior plaster skin, and painting.

"As well, we have historic places permission for an archaeological excavation around the whole building.

"We will be removing about 150mm of topsoil and battering the ground away from the house to improve drainage.

"And with that done, we have essentially started at the top and moved to the bottom, repairing and weatherproofing.

Mr Milne smiled when asked about a future use.

"That's one of the imponderables of a heritage building, in finding an appropriate use"Isobel has spoken of it becoming an artists' retreat.

"Whatever, it needs viable commercial use to generate an income capable of maintaining it.

"Perhaps high-tech office space? That would provide a nice symmetry between old and new."