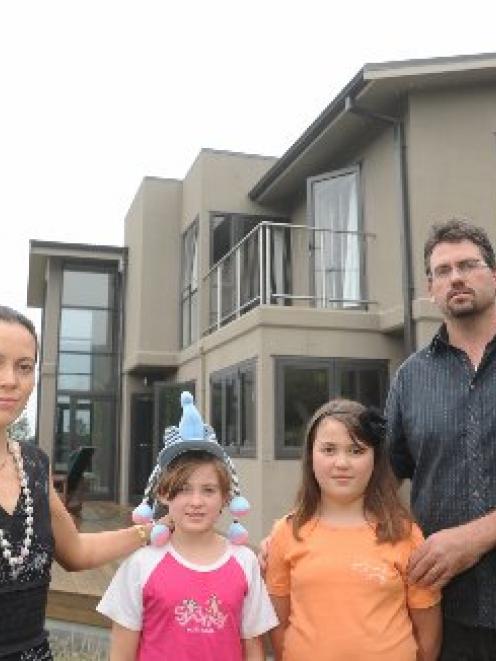 Dunedin family (from left) Deborah Wai Kapohe and Portia, Alyssa and Michael Beazley are watching their $550,000 dream home fall to pieces. Photo by Peter McIntosh.
A half-million-dollar dream house in Dunedin appears to be a leaky home, prompting a cry for help from the family living in what they say has become a mouldy nightmare.

It has also prompted a warning from an Auckland-based leaky homes expert, who says the home's condition might be a sign of a much larger leaky-home problem across Otago.

Michael Beazley, of Australia, and Invercargill-born opera singer Deborah Wai Kapohe - with daughters Alyssa (10) and Portia (9) - moved into their recently-bought $550,000 home at 36 Leithton Close, in Glenleith, on December 1.

Since then, cracks and holes had appeared in walls, bubbles in the ceiling, and water had been discovered running down interior walls and pooling in places that should be dry.

A ground-floor aluminium window frame was bowing under the weight of the home's upper floor, and a wall of windows in their living room flapped "like a sail" in high winds.

Worse still, toxic black mould known to cause respiratory illnesses had been found under the stairwell, thriving in the damp conditions.

Mr Beazley said the weeks since December 1 had been "devastating", with little sleep and his plans to study at the University of Otago on hold.

An inspector from Reconstruct, an Auckland-based leaky home recladding specialist, visited last week and was "horrified" by the home's condition, Mr Beazley said.

The couple had since received a quote of $563,700 for repairs - more than what they paid for the home in the first place.

The couple have lodged a claim with the Government's Weathertight Home Resolution Service (WHRS) - administered by the Department of Building and Housing - which was yet to be assessed.

However, they feared any resolution could be months away, with a further six-month wait for repairs to be carried out.

In the meantime, they have written to the Dunedin City Council, alleging "irregularities" in the council's building inspection process and asking for a safe house to live in while the problems are sorted out.

The couple bought the house after obtaining a land information memorandum (LIM) showing the building had received a certificate of compliance from the council.

However, Mr Beazley told the Otago Daily Times the council appeared to have missed obvious flaws when granting the certificate - certifying it met Building Code requirements - in 2005.

The couple had since learned from neighbours the home was completed and lived in from 2001 but not certified as code compliant until 2005, just before the original owners sold to a second owner.

Partial repairs had been carried out before the certificate was granted, but had not fixed all the problems, Ms Wai Kapohe said.

The difference in dates was significant, meaning a 10-year limitation - the cut-off point for a homeowner to make a WHRS claim for leaky home damage - was closer than first thought, Ms Wai Kapohe said.

The couple had believed the certificate meant the house was completed in 2005.

Ms Wai Kapohe said they felt "obstructed" by the council, which had been inspecting the house since 2001, documents showed.

Council chief building control officer Neil McLeod rejected that suggestion when contacted, but refused to discuss the details, and also declined to comment when asked about the condition of the house and the council's handling of the issue.

"It's gone into a semi-legal process. There will be no further comment from me."

He referred questions to council city environment general manager Tony Avery, who issued a brief statement saying it was "not our practice to resolve such private matters through the media".

He confirmed the council was reviewing its performance and procedures as a result of the couple's complaint, but refused to say whether they would be offered a new home.

"Those findings will be conveyed to the owners of 36 Leithton Close when completed."

Mr Beazley said those shown through the home, including industry figures and the inspector from Reconstruct, which has dealt with 500 leaky homes, had reacted with horror.

Reconstruct managing director David Holloway said the couple's home had all the hallmarks of other leaky homes and was at the "moderate to severe" end of the spectrum.

He believed the couple had a "reasonably strong" case against the council for approving the home, as well as other parties involved in its construction and sale.

The style of cladding used was known to cause problems, but the situation had been exacerbated by specific flaws allowing moisture in, including uncapped parapets and missing internal gutters and window eaves, he said.

The house also showed signs of structural problems, including the flapping living room windows, he said.

"There are items that are definitely defective and items that need to be investigated, that may also give rise to further repairs," he said.

The mould under the stairs was believed to be Stacci botrus, which was "quite a serious issue", known for causing respiratory illnesses for the occupants of other leaky homes when mould spores were inhaled, he said.

The home's principal builder, Geoff Martin, of Dunedin, confirmed when contacted he was employed to work on the house, but insisted design specifications were followed throughout.

"You can only follow the plan. It was built the way it was designed.

"The cladding was put on, as far as I know, to the specifications of the time."

The monolithic cladding system used was "not really a design that suits the climate we've got here", but he could see no reason for the home not to receive a code of compliance certificate.

"There was always room for potential problems, I suppose, with that type of design.

"I'm not a building inspector, but as far as I could tell, it was finished to the plans at the time, and the plans were signed off by the council."

Mr Holloway said it was likely many other homes were in a similar condition in Otago, but had not yet been detected because climatic conditions slowed deterioration.

The Government's Weathertight Home Resolution Service - which offered mediation or tribunal decisions - has so far received 8662 applications for assistance, including just two from Dunedin and 23 from Queenstown.