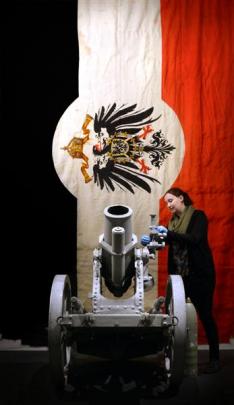 The show, almost 100 years to the day since World War 1 began on August 4, 1914, provides a survey of Dunedin and its people during the war and runs until May 3.

It was sobering to realise that many young Dunedin and Otago men had died during World War 1, well before reaching her present age, she said.

Prominent in the exhibition is a World War 1 German medium mortar, loaned by the Antique Arms Association's Otago branch.

Branch secretary Bill Lang said the mortar fired a 62cm-long shell and was a ''devastating'' weapon, with a range of up to 1.2km.

It could destroy trenches or explode shrapnel in mid-air.

Museum organisers said the exhibition gave people the chance to explore what life was like at home and abroad during this era.

The exhibition covers the war's major battles, as well as the work of the Otago Women's Patriotic Society, whose members raised large sums of money to send great quantities of ''comforts'', such as knitted socks, to the troops.

Conscientious objectors also feature in the exhibition, as does a signed copy of Archibald Baxter's book, We Will Not Cease.