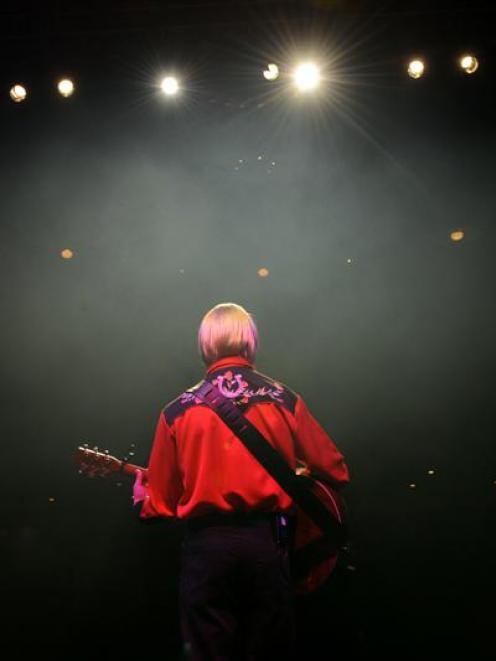 Bevan Gardiner performs as John Denver during rehearsals for Whisper the Wind in Dunedin. Photo by Stephen Jaquiery.
Negotiations are taking place for an album of previously-unreleased John Denver songs to be recorded by Dunedin musician Bevan Gardiner.

Gardiner (21) is performing as Denver in a tribute show of the American singer's life, Whisper the Wind, which premiered in Dunedin this month.

"John wrote about 350 songs, but only half were ever recorded. Bevan is going to record the album John never got to do," Dunedin promoter Dennis Brown said yesterday.

Denver died on October 12, 1997, when the aircraft he was piloting crashed into the Pacific Ocean off Monterey Bay in California.

"He was going back into the studio to record a new album when he was killed. All John's stuff was put in a warehouse and it's never been recorded. We're hoping to do a double CD, with his best-known songs on one CD and the other CD of his unreleased songs."

United States promoters were also excited about the album concept and plans to tour the show there next year.

"I was absolutely blown away by Bevan," Mr Denison said at the time.

"I couldn't believe what I was hearing."

Mr Brown will learn about progress on the record deal in a 10am [NZ time] tele-conference with American promoters today.

"When I put Ken on the plane back to New York he was looking at getting the album deal done and working out a recording schedule. There's no ifs or buts. It's going to happen," Brown said.

"We'll get Bevan over to New York and get him in the studio with John's original producer, Milt Okun, who was working on a new album with Denver before the singer's death.

"I don't know of anybody else . . . who could do this like Bevan. He's got exactly the same blues note as John Denver," Brown said.

"We've been getting emails from all over the world from John Denver fans. Someone came up to me after hearing Bevan the other night and said: 'John Denver isn't dead'."

Gardiner has been partially-sighted since birth, with between 5% and 10% vision.

He has won awards singing Denver songs for the past three years at the Gold Guitar Awards and Country Music Awards of Australia.

After completing its North Island tour, Whisper the Wind returns to the Regent Theatre for a 5pm performance on October 19.