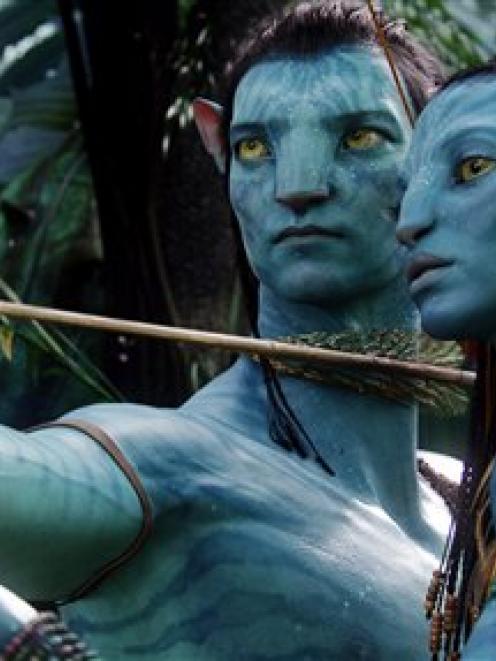 The character Neytiri, voiced by Zoe Saldana, right, and the character Jake, voiced by Sam Worthington are shown in a scene from, "Avatar." (AP Photo/20th Century Fox, File)
Dunedin looks likely to remain a two-dimensional city in a 3D world - at least, that is, in a cinematic sense.

The visual effects of Avatar have reportedly wowed nearly 700,000 New Zealanders since the film opened in December.

Most people have seen it in one of the country's 23 3D cinemas.

None of those cinemas is in Dunedin and Otago Daily Times inquiries yesterday suggested Dunedin will continue to be one dimension short of centres such as Auckland, Wellington, Christchurch, Nelson and... Hokitika.

Although there have been rumours Hoyts was considering a 3D cinema for Dunedin, marketing executive Kate Stace would only say Dunedin audiences were as important to the company as those in other cities.

Group manager for Rialto Kathryn Bennett held out no prospect of that company introducing 3D movies to Dunedin.

And Metro owner operator John Wilson could not see a business case for introducing the technology to screen 3D films at his 60-seat theatre.

The problem, they agreed, was the cost of the projector, special glasses (still required) and other equipment needed to screen modern, digital, 3D movies.

That rules out the possibility Dunedin movie-goers will see 3D sequels of Avatar or the 30 other 3D movies for release this year - unless they travel to Christchurch or, perhaps, Hokitika.

Chairman of the Westland Community Centre Inc that has spent $150,000 installing 3D technology in Hokitika's 414-seat Regent Theatre, Bruce Watson, extended a tongue-in-cheek invitation to Dunedin people to visit Hokitika for a night out.

The town is half-way through a $2 million redevelopment of its 1930s art deco cinema and old technology.

Mr Watson said their market research told them to go to 3D and Avatar, which has attracted an audience as big as the town's population of 3400, had got the refurbished cinema off to an ideal start.

It is running five shows a day, seven days a week.

Mr Wilson noted the grants and community funding that went into the Hokitika project and believed 3D was "way out of my league" cost-wise.

Mr Wilson believed the colour of Avatar was "far more vibrant" in 2D and 3D had the disadvantage of affecting those prone to motion sickness and did not work for people with poor sight in one eye.