Dunedinites hunker down and wait 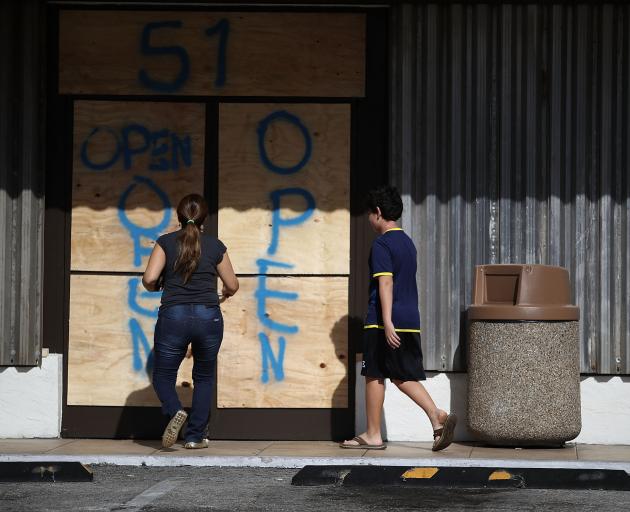 A business is prepared for Hurricane Irma with boarded up windows and doors on September 7, 2017 in Key Biscayne, Florida. Current tracks for Hurricane Irma shows that it could hit south Florida this weekend. Photo: Getty Images
A Dunedin mother faces an anxious time while her daughter, an intern at Walt Disney World, plans to hunker down in the theme park when Hurricane Irma hits.

Hinekura Lawson-Candelaria’s daughter left Dunedin on August 16 for the Disney internship, which is organised by the New Zealand School of Tourism.

Meanwhile, Otago basketballer Zoe Richards (20) is preparing to evacuate from Eckerd College, in Florida, just three days into her time there.

Ms Richards would be driven about 45 minutes north of the college and inland, a family member confirmed.

She would stay at a hotel alongside a group of others from the college.

The category five hurricane has been reported as the most powerful the Atlantic Ocean has experienced.

It has torn through a string of Caribbean Islands, leaving at least 10 people dead, and was expected to hit Florida on Sunday (local time).

Miss Lawson-Candelaria  said other Dunedin people were part of her daughter’s group.  She is in constant contact with her daughter, who did not want to be named. The group was told late yesterday afternoon to plan for hunkering down at the complex. It was safer to stay there rather than their accommodation. Earlier in the day, Miss Lawson-Candelaria had contacted Dunedin South MP Clare Curran, fearful about whether the group should evacuate.

"If it was any old cyclone that’s fine, but this has been promoted as being the worst natural disaster and the worst cyclone in United States history. That’s what scares me," Miss Lawson-Candelaria said.

New Zealand School of Tourism quality development manager Deborah Dove said the school was in touch with the group.

"We have been able to make contact with some of our graduates today who have said they are feeling a little anxious but safe and well supported by Disney."

"They have been advised to stock up on water and food and haven’t been asked to evacuate," Mrs Dove said.

"One graduate commented that the Disney property was built to withstand hurricanes and that they have back-up power generators so she was feeling secure."

An MFat spokesman said it was monitoring the hurricane and had posted information on the SafeTravel website and Facebook page.

"Our SafeTravel advice for Hurricane Irma urges New Zealanders to follow any instructions issued by the local authorities, including any evacuation orders, keep their family in New Zealand informed of their wellbeing and to contact their airline or travel agent directly if their travel has been disrupted."

The spokesman said 135 New Zealanders had registered  as being in the affected area.