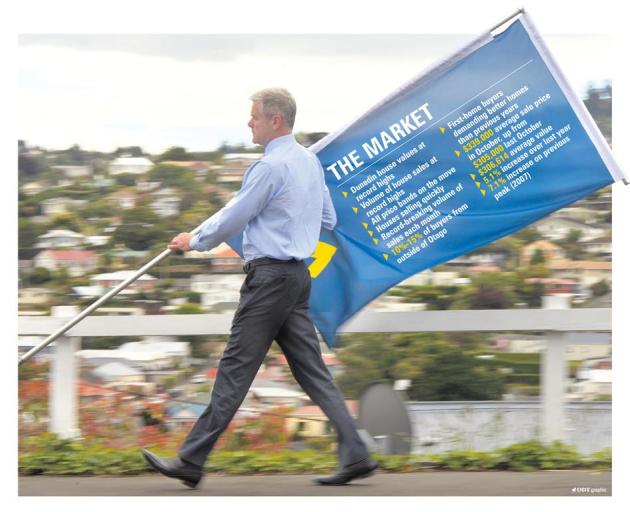 Records - in average values, average sale prices and volume of sales - have been tumbling since August and property experts have told the Otago Daily Times the buoyant market could remain for a while.

• Buyers 'pay a premium' for dream

Home buyers had begun snapping up properties before the first open home events, while first-home buyers were wading into the market with bigger deposits and higher expectations.

People moving to the city from other regions had sharpened demand.

But the flipside to a sellers' market was tough conditions for first-home buyers, he said, with some open homes being attended by up to 50 people - ''unheard of numbers'' for Dunedin.

Prospective first-home buyers, unsuccessfully at first, were bidding higher on their second, third or fourth attempts to try to avoid failing again, he said.

Some prospective buyers were now putting in unconditional offers to avoid disappointment, something new for the local market.

Mr Miller said all the signs showed the city was ''definitely'' in the middle of a boom, a view backed by figures, according to Property Institute of New Zealand Otago branch chairman and registered property valuer Adam Binns.

Mr Binns said the primary reason for any property boom was ''the basic principle of supply and demand''.

Low interest rates were a key part of the demand, with increased job numbers and lowering loan-to-value ratios contributing.

In contrast, the city had a ''reasonably limited'' supply of housing.

Metro Realty sales professional Lyndon Walker said the supply-and-demand scenario appeared to be forcing a shift in what first-home buyers were needing to spend.

Previously, they had targeted homes selling in the low $200,000 bracket, but had recently shifted their sights to ''the mid-twos and upwards''.

Many were using their KiwiSaver retirement accounts to bridge the gap.

''We're seeing more and more of it, with the KiwiSaver. In this market, they're pulling it out.

''Because there are multiple buyers, some are offering more to try and secure that property.''

That market shift appeared to have begun around August, he said.

''I've had some busy winters, but this August and September was the busiest I've ever been, personally.''

Mr Miller agreed that while prices were lifting, the big rise was in the number of properties being sold.

''We've been having record numbers, month on month, since August. We've just found it absolutely [brilliant]. They've [numbers] gone off the charts.''

The city's property market had experienced strong growth between 2003 and 2007, but when the global financial crisis hit, the market ''responded almost immediately''.

The city had struggled since and been badly affected by the Reserve Bank's restrictions on loan-to-value ratios, brought in to cool Auckland's property boom.

Those ratios had since been relaxed, interest rates were low, and Dunedin was back on a roll, she said.

''Suddenly, September, October, November have been crazy in terms of the level of buyer interest. Supplies are well exceeding demand.''

Mr Miller said the years of a relatively flat market had created a ''blockage'' in people choosing to buy a better home. The upturn was now encouraging those people to upgrade.

But it wasn't just Dunedin people fueling the boom. . There was a clear increase of people - estimated some 10% to 15% - from outside Otago entering the Dunedin property market.

Significantly, many of them were coming from Auckland, and while Dunedin locals were by far the biggest players, the interest from outside of Otago had ''certainly sharpened the market''.

''I don't think it's a sole reason, but I think it's one of a few reasons.

''There's a whole bunch of things going on here. The conditions are ripe. And it's brought people to the fore.''