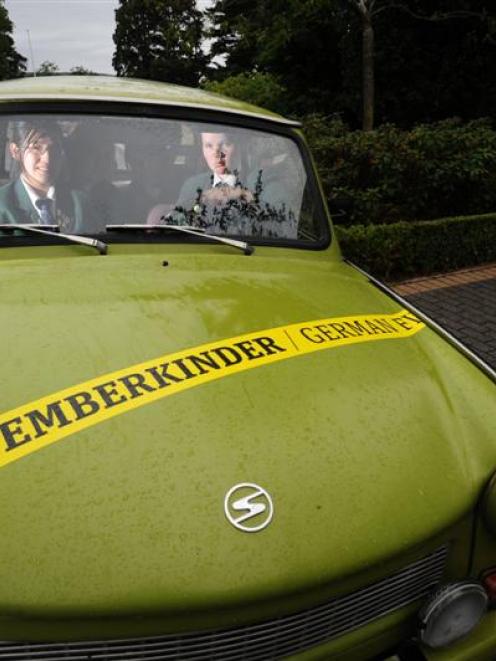 Sandy Chu (left) and Katie Whitefield get a feel of life as it was in East Germany before the Berlin Wall came down, by sitting in an East German Trabant. Photo by Craig Baxter.
It has a smoky two-stroke engine and a distinctive sound, but the Trabant runs on the smell of an oily rag, which makes it the perfect car to take on a road trip.

Known as the "Trabi", the little car is regarded with derisive affection as a symbol of East Germany.

There are only a few working models left in the world, and only one in New Zealand.

Columba College German teacher Jenness Riethmaier said the Trabi was found in Switzerland and its owner, having failed to get a warrant of fitness for it under the strict Swiss system, agreed to sell it to the Geothe Institute, which then arranged its transport to Wellington.

After 27 parts had been altered on the vehicle, it passed a six-month warrant of fitness and made the journey to Dunedin, she said.

"For the past few years, a German car has been used to focus on a particular topic or event in German history. A SmartCar and a BMW have helped make pupils aware of Berlin's history and of the environment."

This week, the Trabi has been driven by National German adviser Bernd Schliephake and AFS student exchange organisation intern Tilman Rademacher around Dunedin's secondary schools, offering pupils a series of activities involving life in the former German Democratic Republic and the reunification of Germany.

Next week, the Trabi will begin its slow trip to Christchurch with stops in Oamaru and Timaru.

Ms Riethmaier said the car would be given to a transport museum in New Zealand.