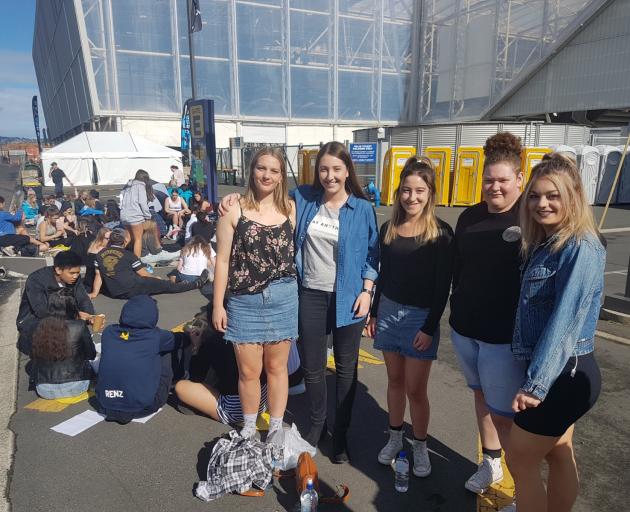 The line of hardcore Ed Sheeran fans waiting outside Forsyth Barr Stadium to ensure a good spot for tonight's concert had swelled to 62 by 11.45am today. Photo: Vaughan Elder

Ed Sheeran fans are flocking to Forsyth Barr Stadium ahead of the pop star's first of three concerts tonight.

Yesterday four Dunedin fans did the city proud. Sisters Annabelle (14), Laura (12) and Caitlyn Ring (10), together with friend Paige Carey (14), were the first in the queue about 8pm.

But then Sydney woman Jasmine McLeish arrived with father Troy, and the Dunedin girls learned the Sheeran superfan had attended all 15 shows so far of the English singer's Australia and New Zealand tour.

The girls' southern hospitality immediately kicked in and they relinquished their place at the head of the line.

Kavanagh College pupil Paige was not fussed about giving up her place, as she was still pinching herself that she would shortly be seeing Sheeran in the flesh.

''It's amazing he's come here, of all places. I think he understands the buzz.'' 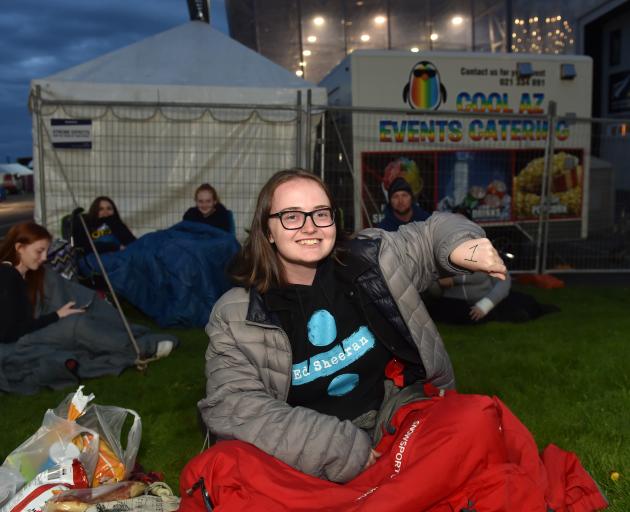 Tapanui contract milkers Tamara and Alex Sargent were also in the line when the Otago Daily Times visited the stadium last night.

Mrs Sargent had recently been injured in an accident on the couple's farm, but she said it was not going to stop her being on her feet for the entire show.

Mrs Sargent would like to hear Give Me Love.

''He hasn't played that in ages. He should play that.''

Jenilee Hill, with a cat named Ed, is another superfan. She has three concerts under her belt and all the merchandise to boot.

Ms Hill will queue for tonight's show early hoping to reach the front barricade. Her love of the singer stretches seven years. 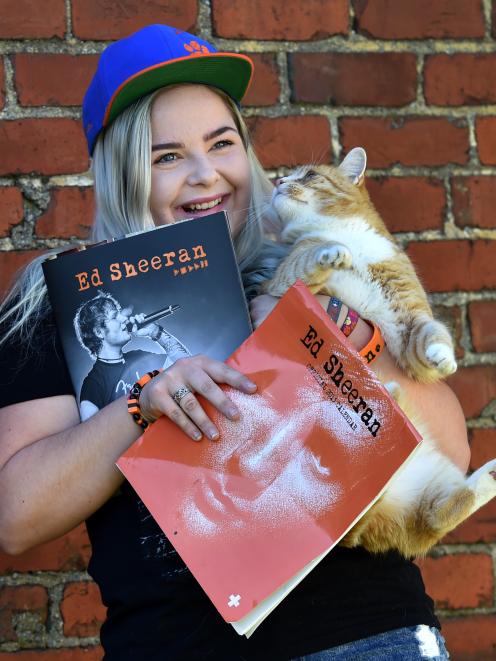 Super fan Jenilee Hill (19) waits with anticipation for the singer to arrive in the city with her ginger cat Ed yesterday.

''I think it was just different. It was emotional and had such meaning.''

She has attended three of the singer's New Zealand concerts, the first at the age of 14 when she ventured to Auckland alone.

''When he came to Christchurch a few years ago I went and it was amazing.''

Even her cat is a constant reminder of her obsession.

''One day we were down the end of the road and this cat was there. He was really scared.

Ms Hill collects Ed Sheeran T-shirts, albums and concert programmes. She will attend the concert with her boyfriend and another friend.

''I would have gone to all three if I could afford it.''

The music ''kept her going'' through some dark times, she said.

On a car journey once, she listened to Sheeran song Kiss Me on repeat for an hour ''and I still love it.''

As for the artist playing in her home town, it was something she ''literally used to dream about''.

Bernadette White (36) shows her loyalty, displaying Sheeran’s album art on her nails.
Bernadette White admits there are some bigger Sheeran fans than her, but she still loves the singer enough to attend all three concerts.

She was initially distraught when she missed out on tickets to the first show.

''At first I bawled my eyes out.

''Then my boss kindly said to me that she had an extra ticket, so if I could be her sober driver I could go.''

For the second concert her friends bought extra tickets and for the third she was recently asked to take a friend's cousin.

''I'm really stoked. I was jumping up and down when I got that text the other day.

Her tickets span the corporate box, seated and standing areas.

''I loved the last two albums especially. I just love it.''

Attending all three concerts would probably be exhausting, she said.

''I've got to go out on Saturday night with my friends afterwards. It's all right because I have a day off on the Monday.''

Senior Sergeant Ben Butterfield, of Dunedin, said the high number of concert-goers driving to Dunedin from Christchurch today means commuters should expect "significant delays" in the city and on State Highway 1 north.

Police had added significant extra resources for the weekend of Ed-mania, but Sheeran would not be getting a dedicated police escort, Snr Sgt Butterfield said.