ETS will affect every part of economy: expert 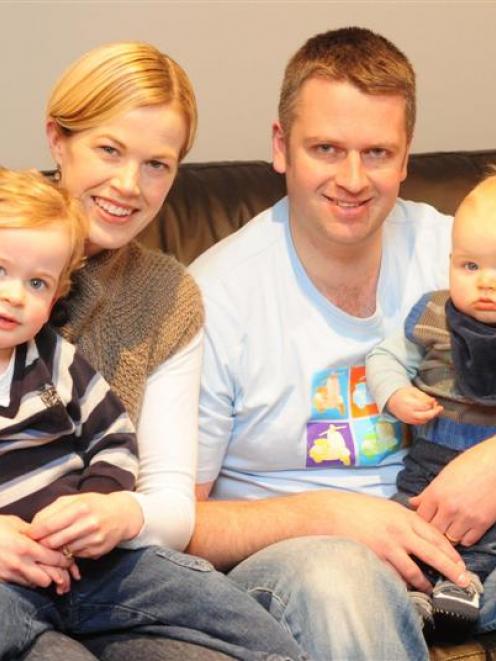 The Marshall family, from left Finn (2), Megan, Tony and Alex (9 months). Photo by Craig Baxter.
Tony Marshall has a couple of boys, a couple of heat pumps, and a couple of cars, and he knows looking after each of them will be affected in some way by the emissions trading scheme.

He should do. He is a tax consultant at WHK Dunedin who has spent plenty of time helping businesses navigate the rules and expectations of the scheme that comes into force today.

That all makes Mr Marshall part of the distinct minority who understand what the ETS is likely to mean for anyone who buys anything, anywhere in New Zealand.

And even after months of working on the scheme, he says there are plenty of unknowns for householders trying to organise their budgets.

"From what I have seen in the media, people will probably know that the scheme will add more to the cost of electricity and more to the cost of fuel, but I'm not sure that most people know exactly what that will mean for many of the other things they consume," Mr Marshall said.

"The problem is, most of what we buy is affected somewhere along the chain by the ETS, and by how much each business decides to pass the cost on to consumers. That's still very unclear - all we've got to go on as consumers is what the Government estimates for us."

There will also be a range of "secondary effects", also called pass-throughs. This means the cost of some goods and services will rise as businesses try to recoup the new cost of energy and transport.

Prime Minister John Key told Parliament last month that this should add another $48 a year to the average household's bills.

Some electricity companies had already announced ETS increases in the 3% range, but other companies say they want to wait to see how much it affects their costs.

Mr Marshall expected the ETS to be most noticeable when fuel companies increased their prices. Even if that added another 5c a litre to petrol, to take the price near to $1.80, that was still a long way short of the $2.17 high of 2008.

He was less sure of how the ETS would affect the price of everyday consumables, such as bread. Making bread took energy, so it would cost more to produce. It had to be transported to the shop, and the shop had to pay more for its electricity to provide the environment from which to sell it.

Factor in increased labour costs - price rises would affect the cost-of-living increase on wages - and there was every chance that prices would go up where people might not expect it.

"Businesses will have different costs, because they will also have to deal with the pass-throughs, but it will be up to them to decide how to get back those costs.

"If they are in a competitive environment they might hold off for as long as they can, or they might already have started to slowly increase prices to avoid any surprises. If they've already made their business run as efficiently as they can, then they mightn't be able to hold off on passing the costs on."

Whatever happened, Mr Marshall expected to pay more for just about everything he consumed: energy literally ran through every part of the economy.

"We can start saving where we can, but wherever we save, a business somewhere will probably be affected. It'll be an interesting time."