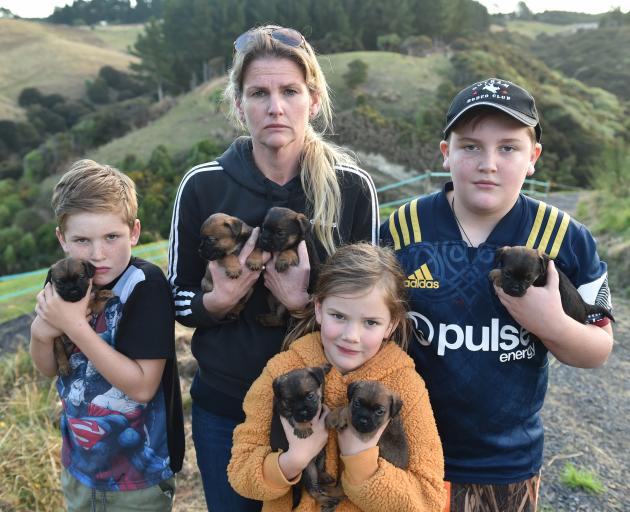 Holding the 4-week-old puppies from their two missing dogs are (from left) Beau (8), Pearl (6), Quinn (11) and their mother Rowan Newman. Inset: the puppies’ missing parents Floss (left) and Scruff. Photo: Gregor Richardson.
A Dunedin family has enlisted a plane, a drone and a search and rescue team to look for a pair of missing dogs and say they will not stop searching until they find their beloved pets. 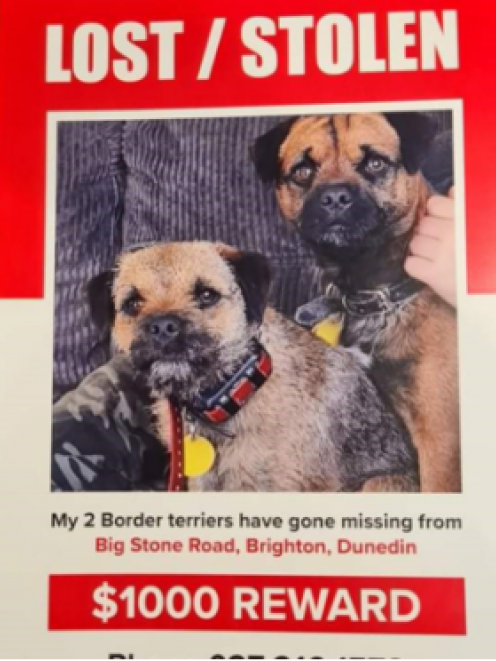 Her three children had been playing with the dogs in a gully near the house, but returned without them.

Miss Newman said she thought the border terriers might have run off into the surrounding forest to chase a rabbit.

They had amazing recall, and in the past would come home no matter how far they had gone, she said.

Miss Newman said it was especially strange the dogs had not come home as they had six 4-week-old puppies and Floss, particularly, barely ever left her litter.

She was worried they could have been stolen.

The area had little traffic so it seemed unlikely, she said, but she could not think of any other reason they would have gone missing.

She had wondered if they might have been shot by farmers protecting their livestock, but her neighbours said they saw nothing.

Her family had hired a plane and a drone to fly over the area, but found no trace of the dogs.

She contacted Land Search and Rescue through Facebook, and a team searched the forestry, which covered a lot of land with gullies, without luck.

She and her children struggled to sleep because of how worried they were, Miss Newman said.

They would move heaven and earth to get them back.

"I know [the dogs are] not my children, but they’re still family.

"I so desperately want them back."

She would keep searching until she got closure.

She recognised her situation was not unlike the case of Dice and Weed, two Dunedin dogs who went missing in 2019.

Their owners had undertaken an ongoing extensive search the length of New Zealand and spent tens of thousands of dollars.

Miss Newman said she was as committed to the search for Floss and Scruff.

"I will never stop. My children are driving me and I will keep searching.

"I will go to any lengths."

She is offering a $1000 reward for the dogs’ safe return.