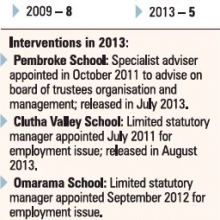 The latest ministry figures show the number of interventions in Otago schools during 2013 has dropped to five - its lowest level in five years.

And for the first time in several years, the ministry did not intervene in the operations of any Otago secondary schools.

Ministry of Education enablement and support sector head Katrina Casey said under the Education Act 1989, the ministry could intervene in the management of a school when it believed there was risk to the operation of the school, or the welfare or educational performance of the pupils.

There were three levels of intervention, she said.

A commissioner was appointed at Totara School, following the resignation of its board of trustees and principal.

A specialist adviser was also working at Pembroke School, to advise its board of trustees on organisation and management.

In 2012, the ministry intervened twice to assist Otago schools, but only once in 2013.

Otago Secondary Principals' Association president Mason Stretch said it appeared schools were getting better at recognising problems and getting help before they boiled over and required a ministry intervention.

It was also pleasing to see secondary schools so settled in the region at the moment, he said.

''I believe that the limited number of interventions is a positive indicator of the strength of governance and management in Otago secondary boards and schools.

''I am sure this is a significant factor in the decline,'' he said.

Otago Primary Principals' Association president Stephanie Madden was also pleased with the decrease in interventions, but highlighted the fact the number of schools requiring interventions was still a very low percentage of the 144 schools operating in Otago.

''It's a really positive figure.

''No-one wants it to get to the stage where an intervention becomes necessary.

''It's good that schools are using the support available before it gets to that stage.''

Schools have to pay for limited statutory managers from their own funding, and some schools have reported receiving annual invoices nearing $90,000 - money which they say could be better spent on pupil education.

As a result, Education Minister Hekia Parata has asked Secretary for Education Peter Hughes to review how the ministry helps schools in difficulty, move back into full self-governance.