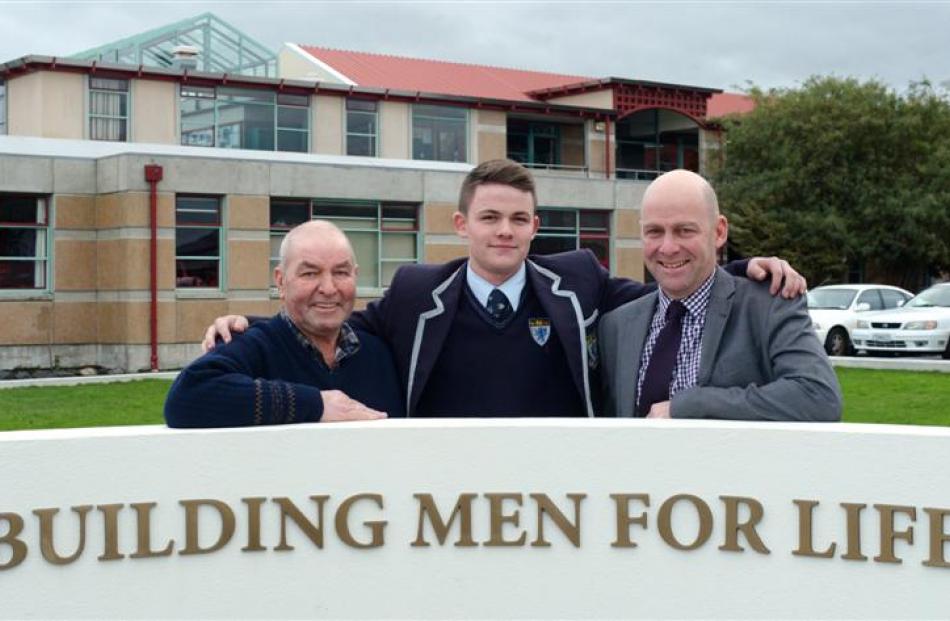 Three generations of the Munro family (from left) George (74), grandson Casey (17) and son Darren (48) have links to King's High School in South Dunedin. George was the caretaker for more than 13 years, Casey is a year 13 pupil and Darren attended the...

The title of Otago's largest school has a new holder: King's High School.

Ministry of Education March Roll Return figures show the previous holder, Taieri College, had 992 pupils last year and has grown to 994 pupils this year, but it has since been overtaken by King's High School with 1008 pupils.

Acting rector Darryl Paterson was delighted with the school's growth, and believed it was recognition of the quality of its education.

''It's just fantastic. It's a great vote from our community. We're obviously the preferred option to send young men to, which makes us very happy.''

Mr Paterson said a great deal of credit for the roll growth also had to go to rector Dan Reddiex, who was appointed in 2008.

''He set the tone early on,'' Mr Paterson said.

''He established a culture of high expectations, accountability and personal excellence - that's his mantra.

''In the five or six years since he has been rector, that whole culture has become ingrained in the school.''

Mr Paterson said the school had also worked hard to refine and develop good systems and programmes - both in terms of positive reinforcement and behaviour management.

''The boys know where they stand and I think parents really like that.''

There was still room for more roll growth, but he declined to detail the school's limit, other than saying: ''It's not too much more than what we've got.''

If roll growth looked to continue in 2015, the school later this year would investigate building more classrooms.

''At this stage, we would be looking to expand the school. There's still space to do that.''

The increasing roll has also prompted the school to consider establishing a uniform exchange to help families keep up with demands.

Board of trustees deputy chairman Darren Munro said his parents, George and Patricia, both worked at the school as caretaker and office administrator, respectively, and it was only natural that he receive his secondary education there. Having his parents working at the school meant it became a second home to him, and that was why he had chosen to send his son, Casey, there.

''Since I started school here in 1979, there has been a continuous family involvement in the school.

''I guess if Casey stays in town and has boys, the reality is he'll send them here, too.''

Mr Munro said the school had seen massive changes in that time.

''In the old days, the parents used to do afternoon teas for interschool sports events and cater for school formals in the old school hall out the back.

''Well, of course, the size that we are now, you just can't do those sorts of things.''

Overall, Otago school rolls have increased to the highest level in nearly a decade.

The region has reached 30,031 pupils for the first time since 2006, despite Dunedin's school rolls dropping 7.8% in the past 10 years and Taieri schools posting a roll decline for the third year in a row.

The regional increase has largely been driven by a 44.48% increase in Lakes district schools and a 7.9% increase in Central Otago schools in the past decade.

Historically, North and East Otago schools have held the second-highest pupil population after Dunedin, but this year the Lakes district has taken over that mantle.

Rolls in South Otago and West Otago are down on 2005 figures, but remain stable.

Statistics New Zealand population projections show the number of 0-14 year-olds in Otago is expected to increase by 3.4% between 2011 and 2021.

The number of 0-14 year-olds is predicted to decline in Dunedin until 2016, but is expected to grow over the following decade.

Census 2006 results show about 194,000 people live in Otago, and Statistics New Zealand median population predictions show the number of residents could increase to 222,000 in 2021.