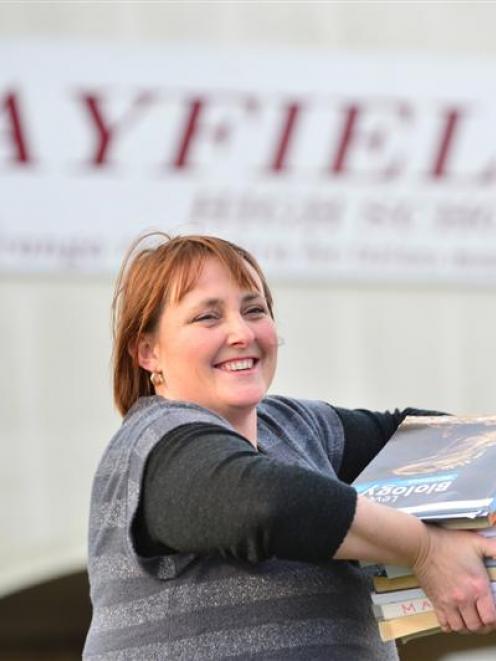 Still hard at work, Bayfield High School biology teacher Jean Allibone heads off to a tutorial for her science class during the school holidays. Photo by Peter McIntosh.
Teenagers often find it difficult to openly express appreciation for the help they receive from teachers.

That's why Bayfield High School biology teacher Jean Allibone is so surprised she has been nominated by her past and present pupils for the 2013 New Zealand Most Inspiring Teacher competition.

The 42-year-old is ranked number two at present, in the top 10 list of the country's most inspiring teachers, and past and present pupils are continuing to sing her praises online in a bid to get other pupils to vote her into the number 1 position before voting closes tomorrow. Bayfield High School Year 13 pupil Rylee Davis nominated Mrs Allibone for the award. She said she and a lot of other pupils had gained the results they were aiming for because of her teaching skill.

''Mrs Allibone gives up so much of her personal time to help any student with biology, but she is also willing to try to explain and teach other subjects.

''Going to biology, we always know that there will be lots of laughs, lots of learning, and a great combination of practical and theory work which always keeps the class really interested.

''She makes the best brownie and brings it into class when everyone has completed a big assignment, or on the last day of term.''

While Mrs Allibone was delighted to have been nominated, she was humble and said her nomination felt ''a little odd''.

''I do the things I do because I like doing them, not because I want recognition.

''But I do feel very lucky.

''A lot of what we do as teachers doesn't get recognised, so it's nice to have this recognition.''

Mrs Allibone said she had taught mainly biology, among other subjects, for the past 15 years, at secondary schools in Dunedin, Wellington and Waikato.

''I just love what I do and I guess it's infectious.

''The kids seem to pick up on that.

''It's important to me that they are able to do my subject and enjoy it as much as I do, and also understand its place in the world.

''Science is all around us and I want them to know where it fits.''

If voted the most inspiring teacher, Mrs Allibone stands to win a $5000 prize pack, including furniture, stationery and technology.

The winner will be announced on October 21.