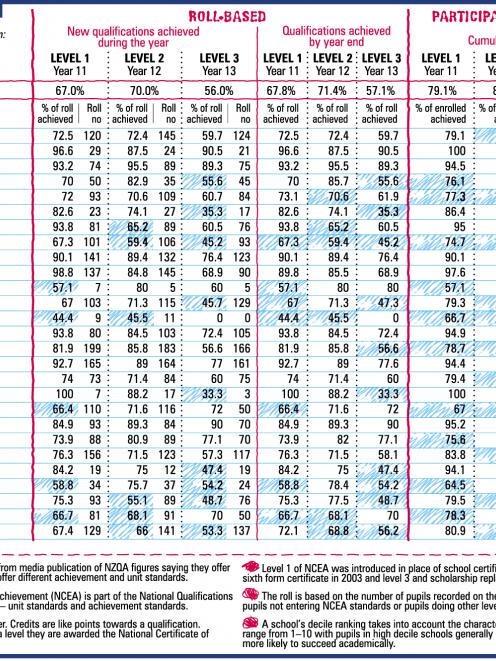 In 2010, nearly half of Otago's secondary schools failed to achieve the roll-based national average pass rate for NCEA level 3, but 2012 statistics show the number has dropped to about a third.

Whereas in 2010 13 schools failed to meet or exceed the national average, in 2012 that number fell to nine. However, NCEA level 1 results were in stark contrast.

Whereas three schools fell below the national average in 2010, in 2012 that number increased to five.

Level 2 results were more stable, the number of schools below the national average ranging from five in 2010 to seven in 2011 and then back to six in 2012.

He believed there was sometimes a cyclical nature to school years, in which cohorts of pupils went through with different strengths.

A change in emphasis of assessments could also have had an impact, Mr Geerlofs said.

Particularly at level 3, the availability of employment could have a significant impact on NCEA statistics, he said.

Many pupils went into jobs or apprenticeships instead of staying on for year 13, because they were perhaps less academically able.

However, with the global recession affecting the New Zealand economy in recent years, fewer jobs and apprenticeships were available, and many pupils had decided to stay at school and have a go at NCEA level 3 while doing Gateway programmes, Mr Geerlofs said.

He believed a possible reason for the improving statistics in 2012 might be because teachers' expertise at level 3 was improving with experience in NCEA, and entry requirements to university courses had been ramped up.

Universities were now expecting to see merit and excellence endorsements, not just achieved.

NZQA deputy chief executive, qualifications, Richard Thornton said schools were different in the way they designed their courses and qualifications for pupils, and the public should be aware that factors such as decile, roll numbers and courses offered would influence a school's statistics.

The statistics were provided by the NZQA each year to assist schools and teachers in their planning, and any comparisons between schools should be treated with caution, Mr Thornton said.

''People using these statistics should keep in mind that schools tailor the delivery of courses and qualifications based on their students' individual learning needs.''

The annual report on NCEA and New Zealand scholarship data and statistics (2012) would be published in May, he said.