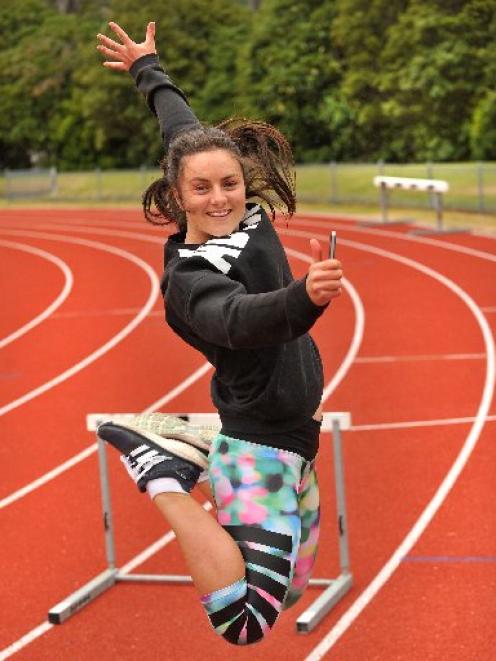 Christina Ashton celebrates her NCEA results during a hurdle training session at the Caledonian Ground, in Dunedin, yesterday. PHOTO: CHRISTINE O'CONNOR
It should be no surprise that Christina Ashton, one of the country's top 100m hurdlers, was jumping for joy yesterday after clearing one of her biggest hurdles to date: NCEA level 3.

She spends up to three hours a day, six days a week training, but finding a balance between her sporting commitments and study was a hurdle that continued to challenge her.

Christine was delighted to log on to the New Zealand Qualifications Authority website yesterday, and relieved to find she had passed NCEA level 3 and gained university entrance.‘‘I think my results went better than I thought they would.''While working hard to win medals, she said she had also been working hard to gain entry to the University of Otago, where she plans to study physical education this year.

Ultimately, she wants a career in sports science, which involves assessing and monitoring athletes to improve their performance.

‘‘It's a relief, I have UE now. Now I can start another chapter in my education and I'm looking forward to starting university.''

Christine said she would continue her hunt for hurdling medals and hoped to qualify for the World Junior Athletics Championships in Russia this year.

An NZQA spokeswoman said Christine was one of almost 170,000 pupils across New Zealand who sat NCEA in 2015, and she was one of the about 85,000 pupils who checked their results online yesterday.

If pupils want a copy of their record of achievement, they can request them from today and the document will be mailed out.

Marked NCEA exam papers will be returned to pupils from late January. After receiving marked papers, pupils are able to apply for reviews and reconsiderations of their results until February 19.

Pupils who sat New Zealand scholarship exams will be able to view their results online from February 9 and apply for reviews and reconsiderations until March 4.