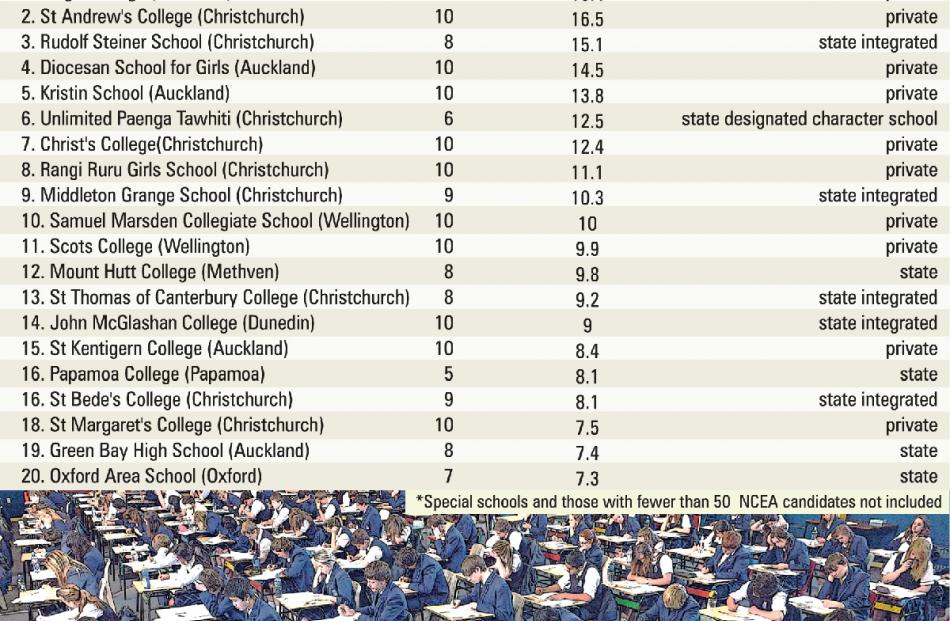 Pupils from high decile schools continue to get special NCEA exam support at a far higher rate than their decile 1 counterparts, this year's figures show.

Next year there may be some change to the system of allocating special assessment conditions (SAC) to candidates, but what is not yet known.

There has been increasing concern within the education sector about ongoing inequity of access to SAC, but the outcome of a joint New Zealand Qualifications Authority/Ministry of Education review completed in August has not been revealed.

Ministry deputy secretary, early years, parents and whanau, Rawiri Brell said there would be recommendations in the review report, some of which would take effect next year and others in 2015 and beyond.

The length of time this was taking was due to the complexity of the work, he said.

''We're wanting action that will be sustainable, not a quick fix, and we've made sure we've listened to a wide range of perspectives from those in schools, parents and NZQA.''

The review report is being reviewed by NZQA and the ministry. It will then go to Minister of Education Hekia Parata, who will consider the recommendations.

This year's figures for pupils receiving special assessment conditions (SAC), released by NZQA under the Official Information Act, show only eight decile 1 candidates (1.2% of the total sitting NCEA in schools of that decile) will receive support this year compared with 1080 (5%) from decile 10 schools.

The number of pupils granted support across the country this year is up by 289 to 3696, but the increased numbers have not changed the pattern of allocation. The highest proportion of SAC is awarded to pupils from high decile schools.

Dyslexia Foundation of New Zealand member Trevor Crosby, who undertook an analysis of last year's figures following an Otago Daily Times article raising questions about equity of access, said he was surprised at the similarity of the two years' figures. His overall conclusions remained unchanged.

Canterbury and Otago remained the ''best'' areas to get SAC, he said.

The only Otago school to feature on the 20 schools with the highest proportion of SAC candidates this year (once special schools and those with fewer than 50 candidates were excluded) was John McGlashan College. Nineteen of its 210 candidates, or 9%, received SAC help.

Private Auckland school King's College again had the highest percentage of SAC candidates, with almost a fifth of its 288 candidates getting help.

The nearby decile 1 Otahuhu College still has no SAC candidates.

''If the decile 1 rate is in fact correct, then the total number of SAC granted by NZQA should have been around 110 to 120. Clearly, there is inequity in access and therefore lack of equality of educational opportunity under the current system.''

Christchurch's private St Andrew's College was second on the list, 16.5% of its candidates receiving SAC. It was also the school with the highest number of SAC candidates - 102.

Mr Crosby considered the cost of getting a specialist report was likely to be the biggest hurdle for candidates in low decile schools. While schools could provide alternative evidence, this year's figures showed that route had a lower success rate than applications supported by specialist reports.

This year, 280 alternative evidence applications were successful and 33 declined. The highest numbers of such applications also came from high decile schools.

• Could include reader/writer help, separate accommodation, extra exam time or the use of a computer.