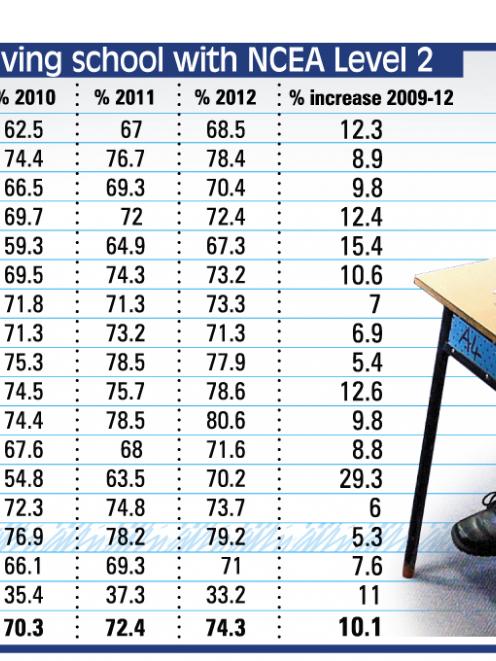 The final analysis of the Ministry of Education's 2012 NCEA data shows the percentage of Otago pupils leaving school with an NCEA level 2 qualification remains among the highest in the country - and the rates are continuing to increase.

Education Minister Hekia Parata said evidence showed pupils with NCEA level 2, or an equivalent qualification, had better opportunities for further education and employment, and an improved quality of life.

''That's why we have set a better public services target of 85% of all 18-year-olds having achieved NCEA level 2, or an equivalent qualification, in 2017.''

Those leading the charge towards 85% are secondary schools in the Nelson and Otago regions.

However, the most recent analysis has found the top spot is now held by the Nelson region with 80.6%, followed by Otago on 79.2%.

''These results are a great reflection on the work our teachers do with students and their families and show the measures our Government is taking to raise achievement are working,'' Ms Parata said.

''That is just brilliant and I would, again, like to acknowledge the teaching profession and leaders in those regions for achieving this lift - and the children themselves.''

While the general picture for New Zealand was positive, there were disparities between different groups of school leavers, Ms Parata said.

Maori and Pasifika school leavers were often not achieving as highly as their peers, and girls consistently outperformed boys, she said.

''Our challenge is to get every one of our kids across the line,'' she said.