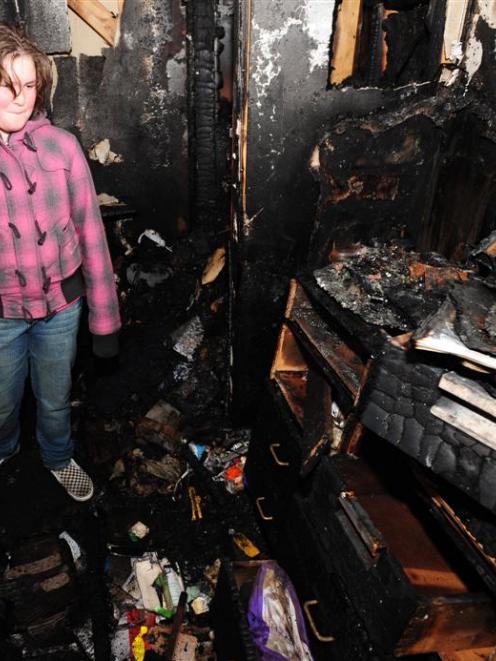 Andersons Bay School pupil Stephanie Pickles (10) visited a fire damaged house in Pine Hill on Saturday during a Fire Service fire prevention and awareness campaign. Photo by Craig Baxter.
More than 500 people went to a Pine Hill "open home" on Saturday - but the property on show was far from prime real estate.

"Luckily, it happened at 10am, when only one family member [of two adults and four children] was at home. It was well ablaze less than 10 minutes later.

"I think a lot of people were shocked by the extent of damage, the smell, and at how quickly the fire spread.

"Glass melts about 600degC, and that's happened here," she said.

Members of the public talked to firefighters from Willowbank and Roslyn Stations on aspects of the fire, and fire safety.

Dunedin woman Margaret Pickles said she and her daughter, Stephanie, were surprised the extent of damage.

"We have two smoke alarms, but I will definitely think about getting extras after this.

"You hear about shutting doors and things, but I think you have to see it like this to realise how quickly fire can spread."

The open home was part of a Fire Service fire safety promotion, aimed at raising awareness of fire prevention measures, such as smoke detectors, and ways of slowing the spread of fire in an emergency, such as closing doors when exiting a building.

Fire services were investigating the cause of the Pine Hill fire.