By Elena McPhee
1 Comment
Ground crews battled freezing conditions and high winds on Flagstaff yesterday as they dampened down the site of Monday's fires, and searched for hot spots.

Gales twice reignited the blaze during the day, one 60m line of fire being brought under control by two helicopters shortly after 2pm.

The original fire swept across 28ha-30ha of scrubland near the Pineapple Track before being contained on Monday evening.

Principal Rural Fire Officer Graeme Still said the fire was being treated as suspicious and a specialist fire investigator was due to arrive on site yesterday afternoon.

"It's odd where it started, that's all," Mr Still said, when asked about the possible cause.

"All I can say is it's in the middle of nowhere." 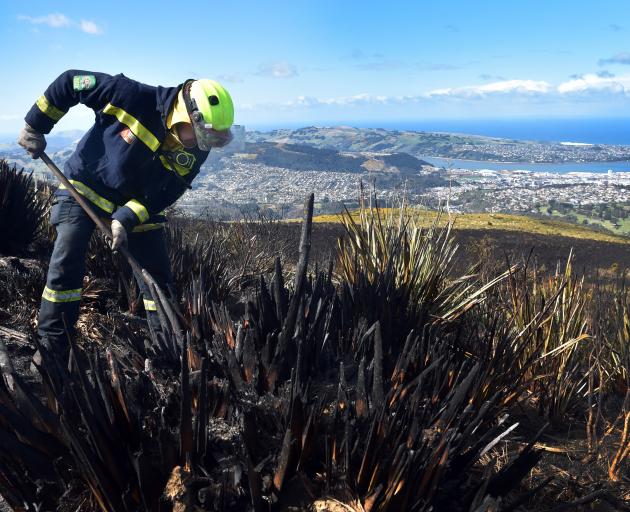 Late yesterday morning about 35 firefighters were on site conducting cold trailing and thermal imaging around the fringes of the burnt area, digging for hot spots beneath flax.

A Fenz spokeswoman said both new blazes were 10m-15m within the perimeter of the original fire, and flared up on the western side of the site, away from the city.

No hot spots were found on the eastern side.

Firefighters began working about 7.30am and had to deal with snow flurries when they arrived.

Despite the weather clearing up, the site was bitterly cold, and extra clothing was left around the perimeter in the late morning in case personnel needed it.

Rural Fire Officer Gareth Bowen said all but one crew was pulled off the hill again shortly after 4pm, due to another fall of snow.

As well as cold weather, wind around the city continued to be a challenge.

MetService meteorologist Lewis Ferris said wind reached a speed of about 50km yesterday and winds of up to 40km were expected today and tomorrow.

The route to the Pineapple track from the Flagstaff-Whare Flat Rd still had a manned cordon, and Rudd Rd had reopened.

The track itself remained closed.