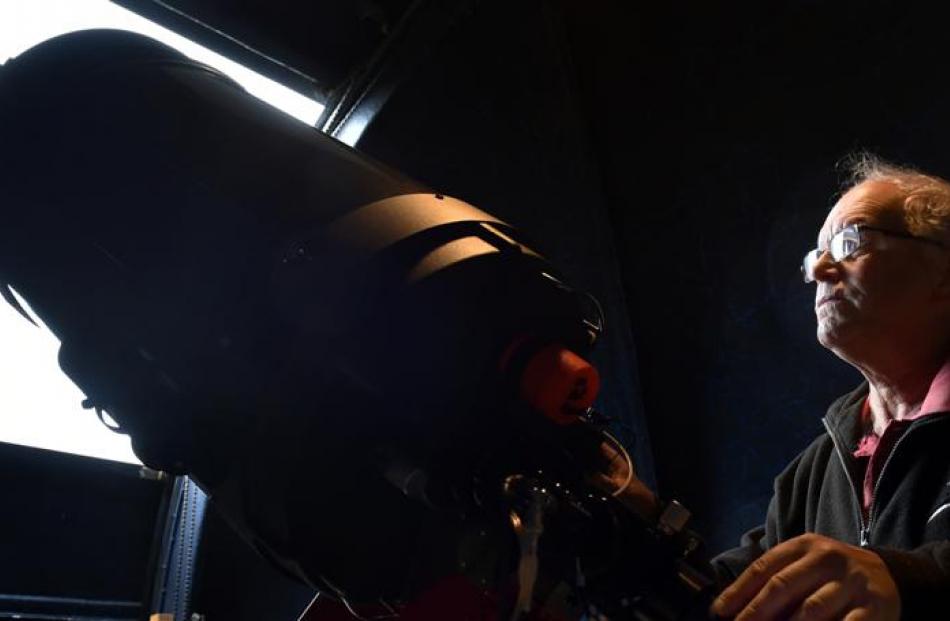 Dunedin amateur astronomer Ash Pennell looks at a 35cm telescope at the Beverly-Begg Observatory that recently made a key observation of distant dwarf planet Pluto. Photo by Peter McIntosh.

In a blaze of international publicity, the spacecraft flew by the last unexplored world in the solar system in mid-July, transmitting back to Earth the first relatively close-up pictures of this remote icy dwarf planet.

But Kiwi determination, a slice of good luck and a shoestring budget have recently enabled Ash Pennell and fellow amateur astronomers at Dunedin's Beverly-Begg Observatory to also make their own important observations of Pluto.

Shortly after 4.50am on June 29, about a fortnight before the New Horizons fly-by on July 15, Mr Pennell had a clear view of Pluto passing in front of an obscure star in north-central Sagittarius.

He was helped by several other astronomers, including observatory curator Rod Jansen and Mirko Harnisch.

This is the second-brightest star Pluto has been known to ''occult'', or eclipse, and careful records of the star's disappearance and reappearance are likely to reveal a great deal about Pluto's atmosphere.

''I'm sort of blown away by these actual results and the interest that's been shown [in the sighting],'' Mr Pennell said.

This was ''probably the most successful observation'' made by the Dunedin Astronomical Society in its more than hundred-year history.

Mr Pennell (64) is president of the society and has been associated with the observatory for nearly 50 years.

Being in the right place at the right time, and good luck with the weather, helped him make an observation that has been the highlight of his astronomical career.

Pluto's diameter is only about 2370km, and that is about the width of the dwarf planet's shadow on Earth.

People outside that shadow cannot see the eclipse, including most of Australia, except for Tasmania.

Astronomers have calculated the line that marks the mid-point of the shadow and that runs very close to Dunedin.

As the time for making the key observations ticked closer, ''full cloud cover'' prevented all viewing from the observatory, Mr Pennell recalls.

Fellow astronomer Stu Todd, trying to observe from Harwood, on Otago Peninsula, was less fortunate, with cloud blocking his view.

Mr Pennell was ''quietly elated'' with the ''great result''.

''You have a lot of fails. Every now and then you get something special.''

Strong international interest has since highlighted just how special the Dunedin observations were.

Prof Bruno Sicardy and his PhD student Erick Meza, from the Universite Pierre et Marie Curie in Paris, France, and the Paris Observatory, have since asked to present the Dunedin results next month at a meeting in Washington DC of the Division for Planetary Sciences, a section of the American Astronomical Society.

The Dunedin results will be released, together with New Horizon results.

And Mr Meza presented the Dunedin findings, together with his own French research on the structure of Pluto's atmosphere, to the European Planetary Science Congress in Nantes, France, early this month.

The occultation lasted about two minutes and four seconds, beginning about 4.52am.

And Mr Pennell understood that Dunedin had recorded the longest ground-based New Zealand observation with a video recorder.

Pluto's average distance from Earth is about six billion kilometres.